Abdul-Rahman Abdullah's work often deals with memory. He's sometimes described it as creating a three dimensional version of his memories, so bringing something that's very personal and private and in a kind of internal mental space into the real world, into a kind of a way that through sculpture he can allow other people to experience his memories in a particular way. Like memories, his works have a certain strange sense of abstraction. While they use realism, he uses the kind of illusion of realism in his work quite a lot, they also have this sense of otherworldly quality.

For this work, Pretty Beach, he's created a group, or a fever, of stingrays. He's carved them so beautifully out of wood and painted them so to really closely resemble what the stingrays actually look like. They're placed on the concrete floor at the MCA and above them is this incredible circle of hanging crystals which represent the rain hitting the surface of shallow water. Abdul-Rahman has used crystal chandeliers in his works before and in this particular work, he's abstracted or ripped the chandelier apart to create this rain.

So this work, it's a highly personal work and I think the great thing about it is that you can experience it on a number of different levels. Just by looking at it, obviously, it's incredibly beautiful, but then as you delve into the work, and particularly if you read the artist's text that goes with it, you realise that this is a complex memory for the artist around his own grandfather. His grandfather, Cliffy, who actually took his own life. An elder statesman of the family, someone who's incredibly important to the family and, I guess, as a grandson, as well, such an important man and such a complex memory. He has managed to capture that through the slow beauty of the stingrays swimming under the rain. 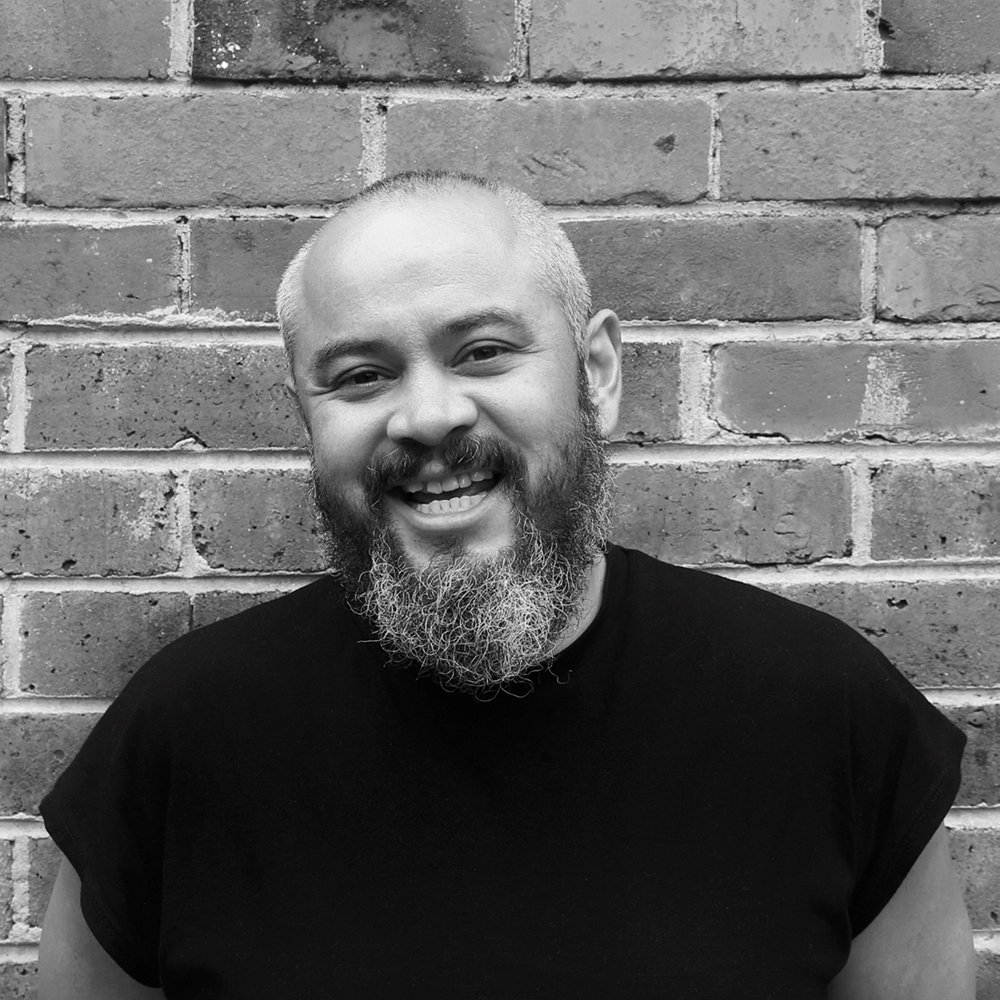 Abdul-Rahman Abdullah is an Australian artist whose practice explores the different ways that memory can inhabit and emerge from familial spaces. Drawing on the narrative capacity of animal archetypes, crafted objects and the human presence, Abdullah aims to articulate physical dialogues between the natural world, spirituality and the agency of culture. While his own experiences as a Muslim Australian of mixed ethnicity provide the catalyst, his practice negotiates shared understandings of individual identity and new mythologies in a multicultural context. Living and working in rural Western Australia, Abdullah provides a unique perspective across intersecting and disparate communities.

We end up talking about stingray curry. I bring up the subject, hoping that food from our shared Malaysian heritage will help us move through the heavier conversation we just had. Death, grief, loss.

But not loss, really. In my mind’s eye I am standing beside my parents’ graves, looking down at the green grass carpet that covers their final resting place. The lightly humid air and the calm silence are softly punctuated by the distant call of tropical birds. If I am outside my body, watching myself standing there, looking down, then in the blink of an eye I can transform and transport to Abdul-Rahman. Away from the tropics, in the southern cold climate, he is seven or eight years old, standing alone on a jetty, looking down also. Abdul-Rahman watches as the sleek wings of a fever of stingrays slowly undulate beneath the glassy top of the cool, calm water.

A flick of the tail and a turn of the body and the stingrays are fleeting in the downpour. One minute they are there, the next they are gone. But never really gone, just disappeared in the falling rain, spirited away, out of sight of the human eye.

I imagine that in this moment Abdul-Rahman’s breath quickens as his eyes search the blue-green water where the fever used to be.

We end up talking about the artwork itself. I ask questions about its form, try to wrangle the conversation away from all the things that make me uncomfortable. Intimacy, emotion, the ethereal.

But the ethereal never leaves me, just like my old people used to tell me. In the present of this world, I try to ground myself in the details of Abdul-Rahman’s retelling. The closeness of the water, so still beneath the firm length of the jetty. The familiarity of childhood and the memories that come back every time the rain is heard falling on the sea. If I close my eyes and listen for that rainfall, the droning rhythm of it all, I find myself caught on the cycles of the wind, the gentle gusts that drive patterns of rain onto the water’s top. The rhythm of it all transports me back to the jetty. Alone now, I stand there, thinking of my ancestors and their closeness on the other side, only a thin veil between us.

A little push away from the side, a small slip into the water, and I climb down and in. Now in this other world, beneath the glassy top, a fever of stingrays glides past me with their slowly heaving wings.

I swim as close to them as possible, feel the love in their caress as their wings brush against me.

We hang up the phone and I close my eyes to think. When I open them again I find  that I have been transported one more time. Now I am standing on the jetty beside Abdul-Rahman. We look down into the water and see the shadowy outline of a lone stingray gliding gently in front of us. I look over at the young Abdul-Rahman and see he is smiling softly into the water.

Abdul-Rahman Abdullah discusses his process and the deep memory and family connections in his work.

Well the stingrays are carved from wood. Most of what I do is sort of based around wood carving, and then juxtaposing that with other materials. Whether they're found objects, or things that I've created. The rain installation is made from silver-plated ball chains and crystals.

My name is Abdul-Rahman Abdullah, and I'm an artist based in Perth, or just south of Perth. I work mainly in sculpture and installation. I guess much of my work draws on memories and how memories can, as I describe it, inhabit and emerge from familial space. 'Cause it's largely autobiographical, although not entirely, is most of it's rooted in my own story. But a big part of that story is a mix of cultures, for me.

My mum's Malay, my dad is white Australian, and we're a Muslim family, I come from a Muslim family. And so there is a real blend of cultures, and I find while that's not a unique position, it sort of gives an insight into how things can mix, and how things blend together.

So many of my works relate specifically to my family, or to more importantly, individual family members, and whether they're present in the work, they're always present around the work, and this particular work, this installation for The National called Pretty Beach, is very specifically about my grandad.

My grandad, Grandpa Cliffy, as we called him, he passed away in 2009. So 10 years ago, he took his own life. So in that sense, the work is a memorial in some sense, a celebration in another sense, about my grandad's passing and I wanted to work out how I could communicate that in a way that was, gave it the dignity which I felt it already had. He lived up in an area called Pretty Beach, it's on Central Coast, NSW, north of Sydney.

The work itself was based on quite a specific memory, from I don't know exactly when but some time in the '80s, as a kid going to visit, as we did, out the front of his house there was a long jetty sticking out into the bay, and at high tide the water would come up under the jetty and under the house. The water was probably about waist deep, crystal clear, and I remember being out there by myself as a kid, watching the stingrays come in and swimming under the jetty, sort of passing under your feet, and it's just a fascinating thing. And then the rain coming in across the bay, and you can see such distances, it's like a curtain coming in, and just crumple that surface of the water, take it away, take the stingrays away from my view, and they just swam on regardless, and then it didn't matter to them, they weren't getting any wetter.

But that idea that they're there, they're living their life and then they just continue on, they're just taken away from what I can see and understand. I see that almost as like a phrase or a passage that reflects how I wanted to feel about grandad. Like, he was there and then he was taken away, but that part of him that matters just continues on. And I guess culturally, it's like that idea of a soul, a soul and an afterlife, is something at the core of what Muslims believe and what I grew up with.

So expressing that without being prescriptive or being didactic about something very specific happening, I juts wanted to get, to sort of, create the idea that life goes on, you know? That that consciousness, that something, that whatever it is that make a person who they are, it continues on, it's just taken away from us, here.

And this space set, I've got the privilege of sharing with the work of Kunmanara Williams. There's just a real dignity and a gravitas that I didn't expect until I came in here for the install, that really just gives a sense of reflection to the world. I mean the works speak for each other in a way that I couldn't plan, I guess, I couldn't do that myself. That's something that's bigger than the individual works, and something that I really appreciate. I mean, geographically, the idea of passing of elders, work from APY lands, sitting here with the work about the rain falling on the Central Coast, NSW. In that contrast but, there's such a unity, and in some way that describes this country, or these countries, and we're living on and in. There's just such an extremity of difference, but there's so much beauty in that.