Artist Alana Hunt lives in the Kimberley region of Western Australia, living on Miriwoong Country. She's presenting images from two photographic bodies of work in this exhibition, on three double-sided light boxes. The colour images on the front receding backwards into the exhibition, and as you move further into the room, you can look back and see the black and white series.

They're both kind of graphic depictions of tourism and development that take place in the Country in which she lives, photographed quite close to her home. The colour series shows tourists enjoying ancient hot springs and swimming in creek beds and landscapes. The images have a voyeuristic appeal as if the photographer's secretly observing these people interrupting and being quite casual in their usage of ancient lands and their uninvited participation in this country.

On the reverse side, the black and white images are cuts in the landscape, gashes that show the marking of development and mining in that region. Where Alana lives in the North West coast of WA quite near Kununurra is a really significantly mined area of the country. And so the impact and devastation of mining on traditional land has been enormous, and so her work documents and speaks to the casual violence on the landscape enacted by leisure activities of white tourists, and also development by the mining industries. 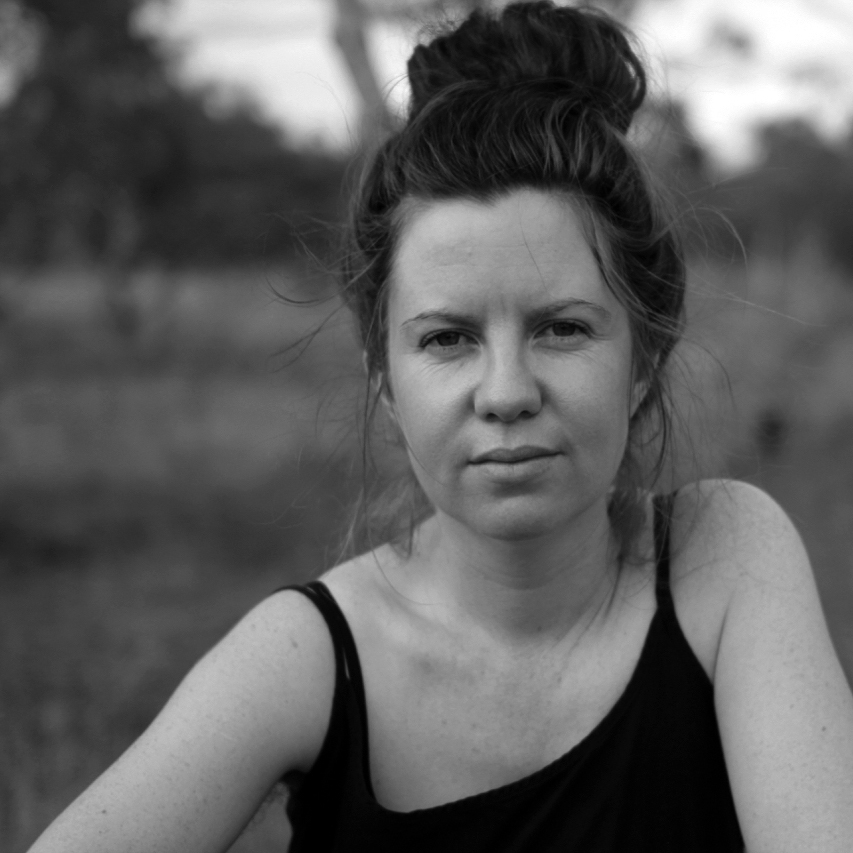 Alana Hunt is an artist and writer who lives on Miriwoong Country in north-western Australia. Hunt examines the violence that results from the fragility of nations and the aspirations and failures of colonial dreams, both within the area she lives and in the context of her longstanding engagement with South Asia. Her distributed art practice moves between publishing, exhibition making and public intervention. She communicates with a broad network of collaborators and peers in the development of her interdisciplinary works and regularly contributes to social commentary through podcasts, panels and webinars

Violence exists in many forms. We are usually only made aware of the big things, the explosions, the riots, the spilling over of collective rage into conflict. But violence is also present in small things. It lingers beneath the surface of everyday life, obscured by the pretence of civility and progress. It is there in acts of aggression and oppression so familiar that they pass by unquestioned, and present again in our ignorance and indifference.

Artist and writer Alana Hunt reveals undercurrents of quotidian violence through artworks examining the brutality of colonisation. After graduating from the Sydney College of the Arts in 2007, Hunt undertook a residency with the Sarai Programme in New Delhi followed by further study at Jawaharlal Nehru University. During this time, she pursued an interest in interdisciplinary practice with a focus on media, the politics of nation-making, and the impacts of colonisation on daily life.

Her experiences in South Asia led Hunt to respond to forms of state violence in works like Paper txt msgs from Kashmir (2009–11), which playfully interrogates a government ban on pre-paid mobile phones, and Cups of nun chai (2010–ongoing) – a requiem for 118 people killed during pro-freedom protests in Kashmir in 2010. These works, circulating in person, online and through the media, confirmed Hunt’s consideration of the public sphere as a medium, and further opened the way art can be a vehicle for ideas that converse with the world.

Hunt now lives and works on Miriwoong Country in north-western Australia. Her life here and in South Asia, along with five years working at Warmun Art Centre on neighbouring Gija Country, has fuelled her examination of colonial culture in Australia. For The National 2021, Hunt exhibits three images each from her series All the violence within this (2019–ongoing), and In the national interest (2020–ongoing). The photographs, shot on 35-mm film and presented on three double-sided light boxes, are a critical examination of the violence, absurdity and fragility of colonial Australia’s everyday dreams of leisure and development.

The images from All the violence within this reveal a landscape of palm trees and rocky outcrops over which swimsuit-clad people clamber to reach the waters of a hot spring. The subjects are largely indifferent to the presence of the camera and the fact that they are trespassing on another person’s Country. Hunt’s photographs are not intended to prompt non-Indigenous people to acknowledge Country, but to reckon with their presence on Aboriginal land; destabilising the sense of certainty and entitlement with which stolen land is inhabited.

In contrast, the black-and-white images from In the national interest depict rocky areas of land that look as if an errant meteorite has struck the earth and carved a swathe through the vegetation. These wounds on the land, however, were not created by a cosmic event. This desolation is human made. The gravel pits are scars left behind by small-scale mining operations where material is dug out of the ground and used to build a network of roads that further the reach of colonisation across Country.

Hunt’s photographs, whether they depict seemingly innocent scenes of leisure or the common scars of industry, speak to the undercurrents of violence that exist when one culture imposes itself on another: the continuing story of colonisation in Australia.

- My work is quite intimately relational in the way that it is pretty influenced by place and people and my relationships with both those things. My name's Alana Hunt. I'm an artist and writer. I live about half an hour outside of the town of Kununurra in the Northwest of Australia on Miriwoong country.

At the National Art Carriageworks, I'm presenting images and writing from two bodies of work. One is called In The National Interest and the other body of work is called All The Violence Within This. I'm quite interested in the less obvious ways that colonisation unfolds and how we are players in that process. So the first body of work that I've presented images from is called All The Violence Within This. And it's been shot at a spring about an hour outside of Kununurra where a lot of non-indigenous people go to. And that's a result of the development of the town there which brought in a larger non-indigenous population in the 1960s, which has continued to expand.

And one of the longer historical things that I think about too is that the only reason we can sit in spaces like these springs now and not feel threatened is simply because of the violence that took place. At least where I live in the early part of the 20th century and the late part of the 19th century. You know, what I'm referring to there is the massacres, the policing, the intense violence of that, that enabled the displacement of indigenous people and the taking of their land. It's because of that violence that we can sit in places like these springs. When viewers first enter they see these quite rich, enticing images of a spring and people kind of enjoying that spring which I hope are a bit seductive in the way that they pull people to almost want that place.

But I also think there's something haunting and awkward and uncomfortable about those figures in that space. They're also photographed without an awareness of being photographed. There's an objectification and observation thing at play going on there.

When you come to the other side, it's a much more dystopian desolate scene like this kind of lifestyle of the springs, has been enabled by this kind of violence. And that side of the image, that side of the coin is called In The National Interest. When developments take place, if they need to say destroy an Aboriginal site you need to articulate how that destruction is in the national interest. My partner is Miriwoong, a person and he's often perpetually consulted, perpetually anxious and trying to navigate a huge bureaucratic system to be able to control what kind of developments are happening on his land. And that's almost a lifetime's work that kind of weight and pressure that's perpetually kind of burrowing against him.

And so he's often quite upset when we see gravel pits that are continuing that he thought they'd been ordered to stop operations because of the particular place that they were in. I sort of came to see these gravel pits as like cigarette burns, like on a tortured body but they're just these small little burns piercing the whole landscape everywhere. And then not the huge Juukan Gorge. They're not the big Rio Tinto mines that blow up entire mountains, but they're small, persistent little pits that nonetheless invade and desecrate people's places. And we do this In The National Interest. I'm also doing a written component of the work throughout the course of the exhibition.

So there's six images presented in the show. And over the course of the exhibition I'm engaging in kind of conversations and correspondence with six different people. We're sort of taking the photographs as a starting point. So I'll extend that conversation beginning with home and bring it out to a broader Australian context and then internationally. And through the work, I hope people like me can see themselves in that and start to reflect a bit and feel a bit uncertain, a bit challenged and kind of recognise some of the more obscure ways that we continue the violence of colonisation.

As part of The National 2021: New Australian Art exhibiting artist Alana Hunt will be Carriageworks inaugural Writer in Residence. Working progressively over the course of the exhibition she will publish Conversations and Correspondence—six texts with various interlocutors that take as their starting point her photographic series All the violence within this and In the national interest.

Artist's acknowledgements
The artist thanks formative and continuing conversations with Chris, Ross and Danie.

This project has been supported by the Copyright Agency’s Cultural Fund (2019) and a Regional Artist Fellowship through the State Government’s Regional Arts and Cultural Investment Program and Regional Arts WA (2020-21).