Cameron Robbins is a regional Victorian artist, living and working out of Castlemaine. He creates elaborate, handmade drawing machines or kinetic drawing instruments that are powered by unseen physical forces. It could be wind power, solar power, the motion of waves, or in the case of this work in the gallery space, the fermentation of grapes from the wine industry. As yeast consumes sugar, it produces gas bubbles which power the drawing machine, that in turn makes these elaborate, very slow spiral drawings that document this process.

Previous drawings on the gallery wall around the machine show a series of fermentation processes whereby in cooler temperatures the drawings are darker and they're tighter, smaller concentric rings. As the temperature warms, the rings become larger, looser and lighter. This work is also about climate change and rising temperatures on the planet because this too affects the agricultural industry and viticulture as year by year, grapes ripen faster and the vintage becomes shorter. 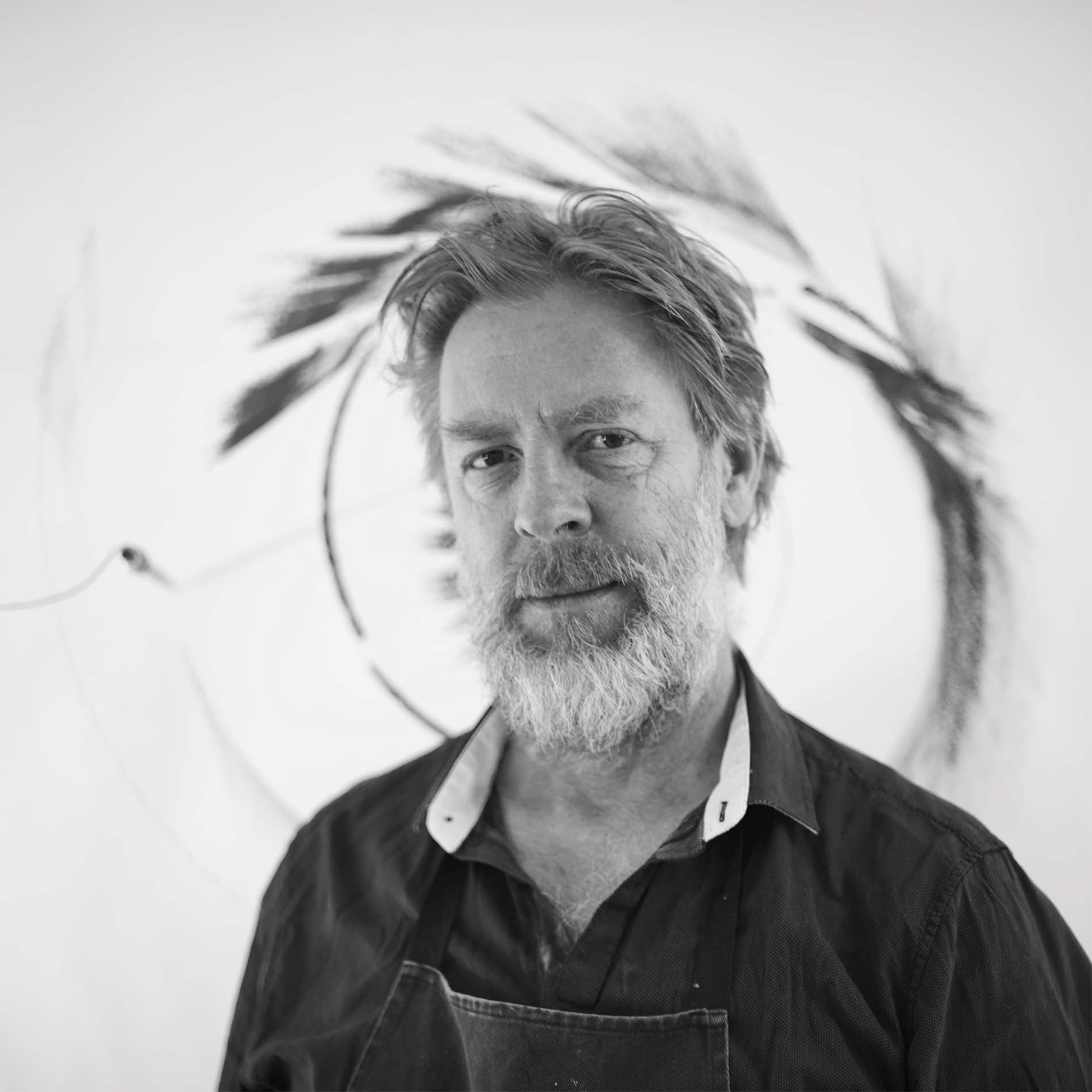 Cameron Robbins’ finely tuned drawing instruments reveal the infinite complexity and beauty of the natural world. Powered by available energies such as wind and water flow, solar and geomagnetic energy, they produce visual artefacts that embrace art and science, in conversation.

Trained as a sculptor, Robbins brings the languages of mathematics, physics and engineering to his work, which he has refined over three decades. Recording and documenting natural phenomena, his kinetic instruments produce drawings in graphite and ink on paper; and more recently, on hard surfaces including marble. Situated between abstraction and representation, their energetic sweeps and curves are at once meteorological records, energy diagrams, and documentation of a specific time and place.

Wind Anolog (2021) is a major new commission for the Museum of Contemporary Art Australia’s Sculpture Terrace. A tripod structure in marine-grade steel, surmounted by twin weathervanes, it responds to the harbour position and powerful wind conditions of the terrace. A graphite stick, attached to a mechanical drawing arm, traces wind patterns onto an oval marble surface modelled on the egg of the sea tern. Its silvery arcs vary according to the speed and direction of the wind; and the design of the arm, which diverts energy through small kinks and a double swivel, creates an element of unpredictability. Expanding and contracting, the patterns accumulate over time, wear away with rain, then build up once more.

Describing his practice as ‘time-based drawing’ that grows by the day, week and month, Robbins observes:

It’s very hard to watch a rock eroding but when we go to a beach, we see the effects of erosion. We’re instantly tapped into a time-based process. I’m trying to visualise that but also make a work that is grounded in the history of the art museum, using materials like marble, bronze, stainless steel – but it is also very delicate. We’re listening to the landscape through it.

Moving from the outdoors in, Robbins’ Oenograf (2021) in the MCA galleries features a kinetic drawing instrument that is powered by another element of the carbon cycle – the fermentation of grapes. Carbon dioxide gas bubbles from the fermentation process power the instrument, which produces drawings during the opening weeks of the exhibition. As Robbins notes: ‘Wine making is a seasonal activity, and the time of juicing and fermentation is called the vintage. The Oenograf will be able to create drawings during the vintage. Eventually, there will be no more fresh grape juice to ferment and wine making will be stopping for the year.’ A reflection of natural processes and time cycles, the work also points to rising temperatures around the world, over decades, as the grapes ripen faster and the vintage shortens.

Environmental temperature shifts impact the drawings themselves, which take shape over 24 hours a day for up to 9 days, on a rotating paper support that produces a spiral pattern. Tight, dense rings accumulate in cooler conditions; wider, looser arcs appear as the temperature warms. Two motors control the speed of the paper rotations, and a small winch pulls the drawing instrument across a long tabletop at a speed of 1mm per hour, its infinitesimal movement creating an intricate series of marks.

Robbins’ practice resonates with diverse artistic traditions, from Land Art to plein-air or landscape art making. Opening up a world of unseen physical forces and dynamic energies, it is beautiful and potent in equal measure.

Cameron Robbins discusses his work at the MCA

- My name's Cameron Robbins. I'm an artist who's showing at MCA at the moment, in two exhibitions: one piece upstairs on the Sculpture Terrace, and one in The National. I've developed this project, the Oenograf. So, oenology is the study of wine, which o-e-n- o- ology. So to call it Oenograf, which is, you know, 'wine drawing', and graph with an 'f'.

The instrument I made for MCA is a bit bigger than this one, because I sorta thought - and it's also like, maybe a little bit more showy, like it's got brass wheels, and a bigger body, and a bigger drawing board and a bigger table. The table is twice the size because it's the MCA and I've got this beautiful 16 metre gallery there. It's just an incredible gallery with a huge ceiling that's I think 5.8 metres high. And there's a very wide gallery as well.
So there's a huge space there, and I've got a winch mechanism that goes the length of the table. So again, that sort of demonstrates a bit more how it works. It's not such a mystery. So, hopefully the audience will be able to see all the different parts, and go "Okay, that's pulling it along the table", and they will see the drawing and then be able to work it out. I think it's important to give enough clues to the audience so they can work it out if they want to. I find that when I go to a new place even for a residency, different periods of time, I've really got to make an adjustment to kind of find the available energy of the area, and what I might be able to work with. Cause, you know, if I'm down the coast it's very easy to work with wind, and even tides and waves, but up here, I was sort of thinking, where is the available energy?

And that's when I met Gilles Lapalus, who is a very good wine maker in the area, and he has a great setup over at Harcourt, and has invited me to come and see, watch the fermentation. And so I found that this is, you know a project that seems to be going places because it really sort of embodies an energetic process that is taking place right here. And it's a product of this region. So, fitter and turner is the trade; I've picked this up really from art school at Victorian College of the Arts they had a lathe like this. And I was always intrigued, wondering what it was. And then when I started making wind machines they showed me what it did, this sort of machine. I avoided getting one for years, because I thought I'd just become a nerd who made engineering things, but [Laughs] anyway I've ended up getting one and it's fantastic. I really need it. These are literally the pivotal parts of a mechanical sculpture.

You know, everything pivots on this and it's gotta be reliable. So here we go, we'll cut this little thumbscrew down for the project. [low whirring sound] [louder whirring sound] [metallic crunching] It's certainly fun to do. It's a bit like pottery, just keeps you intrigued. But it's also great to keep everything under your control in the workshops. So that you don't have to outsource everything. Because outsourcing is all very well, but it's actually not much fun because you have to drive around and tell people what to do all the time. So you're a bit more like an architect when you outsource, which has its advantages, but being an artist you want to spend time in the studio. I like everything to just sort of be a bit handmade, but sort of precision as well. There's two motors in here that are computer-controlled. So I have to enter a bit of code to sort of change the speed of the motors, but the motors are incredibly slow.

And so we have... This trolley moves along at about one millimetre per hour. So I've got it down to that sort of slowness. And so that means that the drawing can be long duration drawing. So the drawing will hopefully be like, 170 hours which is about six days. So I'm sort of aiming for that, about a six day drawing all on the same sheet. So it's rotating very slow and moving very slow. So you end up with a spirally drawing that has about six days worth of wine activity. So we have here the crystal pressure cooker. And this lets the gas out of the fermenting wine. Like you'd all be familiar with that bubbling of distillation and fermenting. And anyway, instead of the little intestinal sort of tube, we've got this French dial which does this lovely big movement with carbon dioxide, and then when it's connected here, it will motivate the drawing in this manner. So little movements and sometimes very slow, might just do one burp an hour at the start and then build up very slowly when the ferment starts. But then, when it's in 'le turbulence', as Gilles calls it, it's going to be more like this when it's really busy and all the yeasts are eating all the sugar and there's a feeding frenzy, and there'll be farting out CO2 and producing ethanol, which is the alcohol.

And we'll be documenting that with this drawing. I have seen people groan when it's so slow they're growling "Oh okay, speed that up!" But it's like, well no, this has got to be a slow one. Hopefully there'll be action with the wine. And so that's sort of what you watch and you can see that the paper is very slowly turning with every one. It takes a few minutes to see anything happening. So it's going to be a real test for the audience, They can't just sort of take a photo and walk off. They've actually got to watch it and see what happens.

Oenograph project is developed with Maison Lapalus and winemaker Gilles Lapalus.
Fabrication works (plywood) by Like Butter
Thanks to Brodie Ellis for her support and work through the project

I acknowledge the Dja Dja Wurrung, Wundjeri, and Gadigal people of the Eora Nation on who lands I work and live.