This large-scale perspex installation has been made by four female artists from Fitzroy Crossing in Western Australia.

The work that they have undertaken for the National involves eight very long Perspex pieces which are hung from the ceiling. It's something that each artist has been experimenting with over the last, probably two years, where they have looked at Perspex as a medium to not only paint on but also to sandwich together to create these kinds of sculptural installations.

They have collaborated together on some of the Perspex panels. And mostly they talk about a connection to country that at the moment they're not able to access, because they're elderly women. They live at Guwardi Aged Care Centre in Fitzroy Crossing.

And because of their fragility, in terms of their physical health, they're not always able to get back to the country that they were born on, which is Noonkanbah and around that area. So they paint the areas around the river that their family belongs to and that they belong to. And they paint the river resources as well.

The importance of painting these things is not just to talk about traditional connections to country and resources but also to make a pointed political comment about pastoralism in the East Kimberley, which is where Fitzroy Crossing is based.

Pastoralism has impacted all Aboriginal communities in that area. And often prohibits access to land and country where people were born. And that's exactly what this work talks about also. 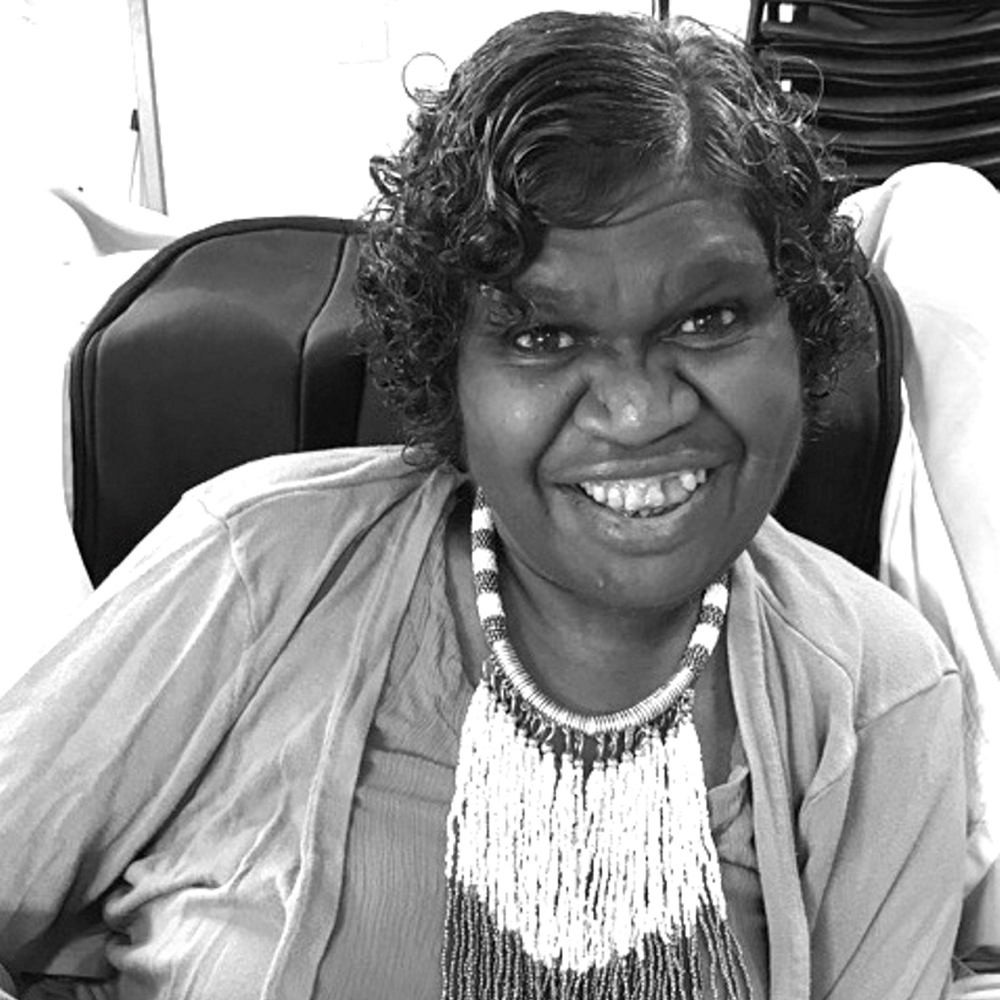 Ms Uhl was a young woman with a disability who lived in Fitzroy Crossing in the West Kimberley area of Western Australia all of her life. Ms Uhl represented her love for her home through abstract paintings of her Country and her community. Ms Uhl’s layering of colours and use of graphic, abstracted shapes create an atmospheric rhythm within her works, which speak to the humidity and expanse of the Kimberley. Her work is represented by Mangkaja Arts, Fitzroy Crossing, and has been shown locally and nationally in group exhibitions. 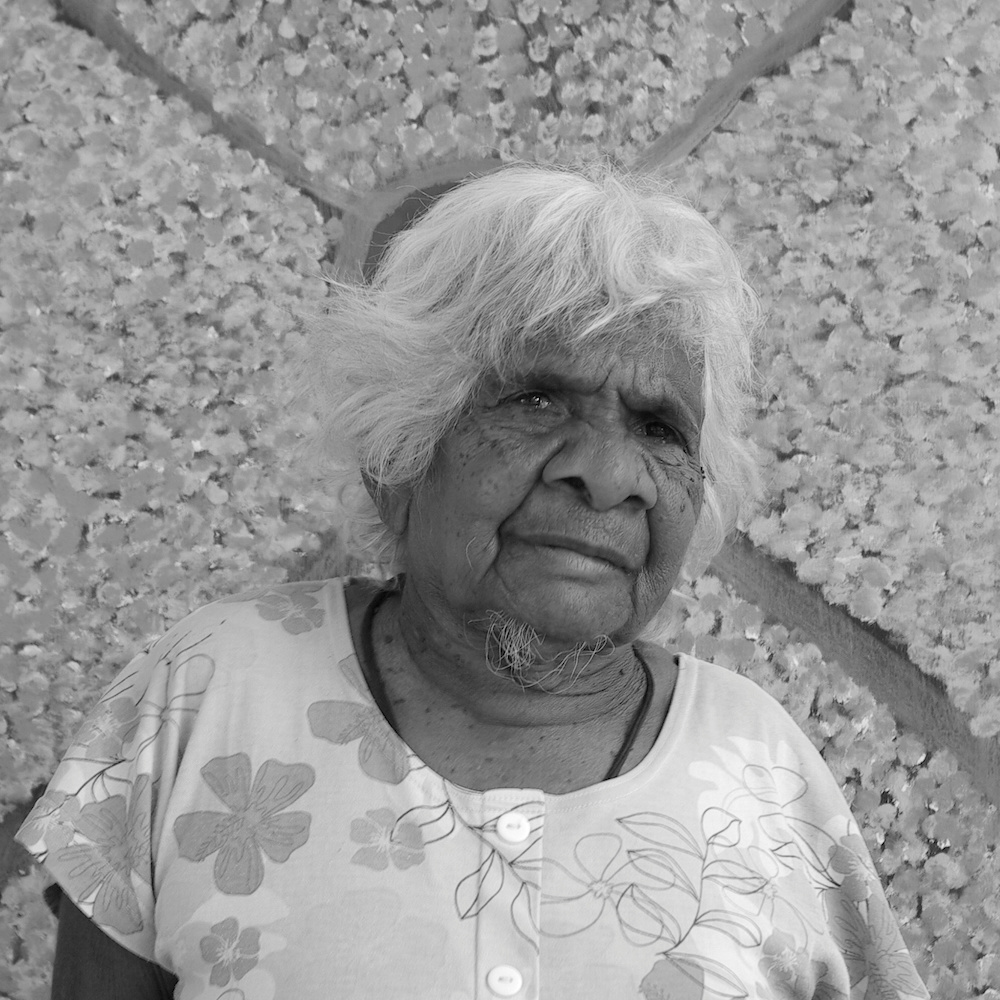 Mrs Rawlins was a Wangkatjungka woman from the Great Sandy Desert. She was a founding member of Karrayili Adult Education Centre and began painting in 1994 at the Karrayili annexe, established in Wangkatjungka community, 100 km south-east of Fitzroy Crossing in the remote East Kimberley region of Western Australia. Until the time of her passing she painted at Mangkaja Arts, Fitzroy Crossing. Her work has been included in numerous important group shows and significant collections around the country, and her distinctive use of vast swathes of translucent colour and dot work individuated her from other Mangkaja artists. 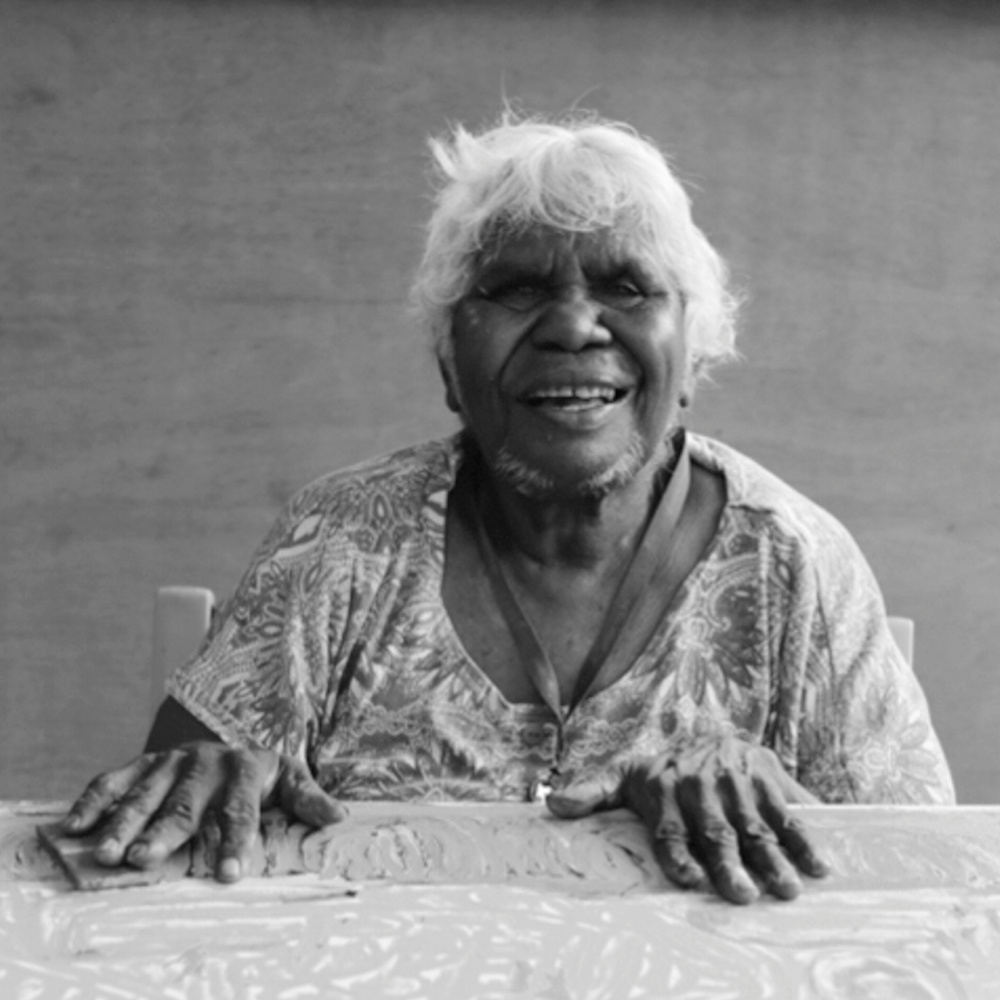 Sonia Kurarra grew up in river country at Yungngora (Noonkanbah), alongside Daisy Japulija. She began painting at Mangkaja Arts, Fitzroy Crossing, in the early 1990s, working mostly on paper. Since 2008 Kurarra has worked predominantly on canvas. She held her first solo exhibition in 1990, and has featured in many group and solo shows since then. Kurarra paints the sandy billabong country along the stretch of the Fitzroy River that runs directly behind the community, including gapi (fish), parrmarr (rocks), ngurti (coolamon) and karli (boomerang). She paints and repaints her custodial Country in abstracted colours and shapes, revealing her understanding of gestural narrative. 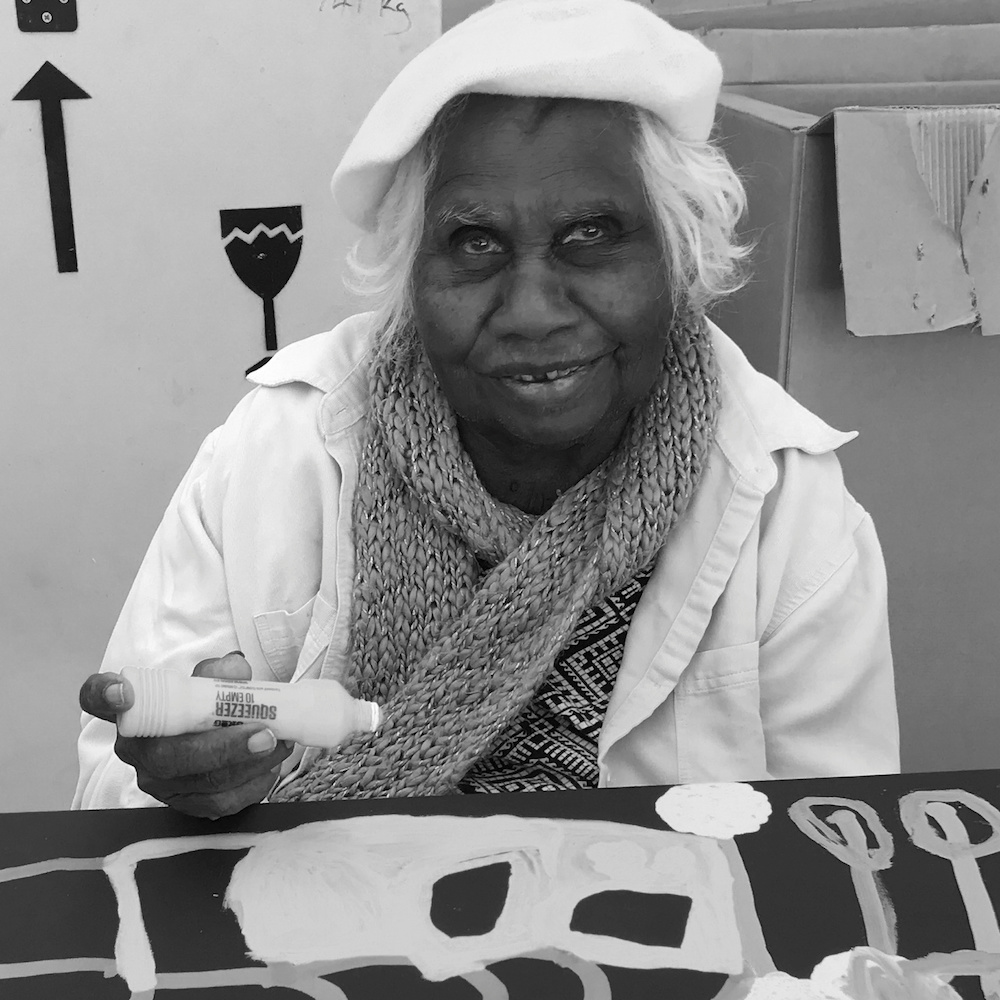 Daisy Japulija grew up at the remote community of Yungngora (Noonkanbah) in the East Kimberley region of Western Australia. She initially began painting at Yakanarra Adult Education Centre, where the main emphasis was teaching children, instruction in language and culture, and teaching people about painting. Those attending were also taken on excursions to the local waterholes and rivers. Japulija visited Kurlku, her mother’s Country, in the Great Sandy Desert only once in her life, but the billabongs and desert landscape of this place became the source of memory and motif that she has subsequently incorporated into her work.

The success of community arts and art organisations is often structured around key individuals, with one or a handful of artists creating an environment for others to thrive within. Sonia Kurarra is one of the cornerstones of Mangkaja Arts and of contemporary art-making in the Fitzroy Valley region. She is one of the greatest artists I have ever worked with, not just because she creates beautiful work but for the emotion that goes into her code-like markings; every brush stroke is loaded with the desire to make another. Seamless, stream-of-consciousness mark-making.

When you arrive at Juniper Guwardi Ngadu Residential Care, Sonia will hand you a massive pile of crumpled drawings, seemingly done overnight. It’s hard to say if she ever sleeps. Painting is so much a part of her being, she must see her Country in everything she does, on every surface, in every reflection. It’s this universal energy that is echoed in the repetitive brush strokes of Sonia’s aesthetic. The watery depths of her riverbanks and billabongs are multilayered microcosms of contemporary life within Guwardi aged care. All at once, her work speaks to the past, the present and the future.

Artists operating at Guwardi aged care include Sonia’s sister, Daisy Japulija, and Mrs (Tjigila Nada) Rawlins. Daisy is a truly candid individual whose work is as soft and interesting as she is. Mrs Rawlins (Nada) is a deliberate and genuine artist whose every mark represents a specific moment in time. A painter on Ngurrara: The Great Sandy Desert Canvas (1997),Mrs Rawlins (Nada) is slowing down but her practice continues to be recognised. The late Ms Uhl also painted at Guwardi aged care. She created soft painterly wonders, manipulating the paint and using thickness and tone to delineate the soft trees that inhabit most of her work. Together these artists form a new female cohort of artistic genesis that will be talked about in the same way as Peter Skipper, David Downs and Jimmy Pike, paving a new direction for contemporary art-making in the Fitzroy Valley region.

Mangkaja artists are leaders in experimentation and after testing some leftover sheets of perspex at the art centre, Daisy, Sonia, Mrs (Nada) Rawlins and Ms Uhl decided to explore the medium further. The resulting works are not vastly different from the way these artists usually paint; as a body of work the perspex paintings speak to the artists’ knowledge, certainty and genius. On perspex, the way Ms Uhl painted is luscious, approaching sculpture and carving. Daisy has similarly mastered the medium; her work plays with negative space and surface delineation more than any other. Born from a complicated mix of commerce, daily activity and a longing to return to Country, these works have the power to affect.

The Guwardi aged care studio is a place of creativity and conversation, and Mangkaja Arts gives artists the space to experiment with different methods of telling their stories. After many decades of making work across the Fitzroy Valley region, it’s fitting that the late Ms Uhl and Sonia Kurarra, Daisy Japulija and Mrs (Tjigila Nada) Rawlins, who happen to work out of an aged care facility only now, later in their lives, are recognised in The National 2019 as Australian artists at the forefront of contemporary artistic practice.

Watch the artists at work at Mangkaja art centre.