Emily Floyd's work Kesh Alphabet is the major acquisitive commission for the Art Gallery of New South Wales in conjunction with The National. It was commissioned for the gallery's central court, which is kind of like our main street, and it's a very large-scale work that occupies that space in a commanding way. The work comprises a series of sculptural elements that respond to the architecture and extend up into the modernist ceiling grid, and also a suite of prints that are sort of like the key to the concept of the work.

Often, Emily references literature in her practise, and this is the case with Kesh Alphabet. The cue for the work is a novel by the feminist science-fiction writer Ursula Le Guin, which was published in 1985 and is called Always Coming Home. In this novel, Le Guin proposes that in order to reinvent society, you would need to start at the level of language, because language produces knowledge. So this society that Le Guin describes in the book, the Kesh society, is quite different than the one we know today. It's matriarchal, it's secular, it's environmentally sustainable, and socialist. In the back of the book, Le Guin included a coda that details the Kesh alphabet, and also a glossary of Kesh words, and Emily has drawn down on this alphabet and glossary for her work. Each of the eight sculptural components relates to a letter in the Kesh alphabet, and together, they spell out a word from Le Guin's language, which relates to the idea of a female experience, inclusion, and also a shift in perspective.

In making the work, Emily was responding to the spatial dynamics in the central court, but also other aspects of the institution, and in particular, she was interested in how this is a patriarchal space, but one that is animated often by the presence of women. And she, during the research phase for her project, spent a lot of time in the central court observing the audience, and came to think of the women in that space as a kind of soft life force that animate the institution's hard infrastructure. By inserting this sculpture into the central court with such a dominating presence, and relating to the Kesh alphabet in the way that it does, Emily is attempting to carve out a space for a female perspective within the institution. 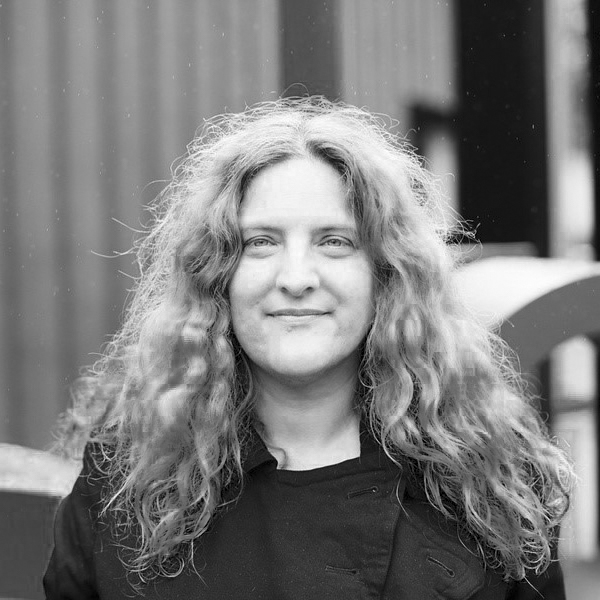 Emily Floyd works in sculpture, print-making and public installation. Her work takes shape at the intersections where sculpture meets public space and design collides with social crisis. It embraces elements of expanded sculpture and a range of print media and typographic artefacts, including the poster and the manifesto. Floyd renegotiates the possibility of public address, critically engaging an increasingly diverse and unpredictable viewership in debate. Her work gestures towards new forms of sociality for which the artwork can serve both as provocation and as venue.

Kesh Alphabet (2017) draws into dialogue the language of abstraction and the coded visual system of the alphabet. Eschewing the familiar lines of Latin script, Emily Floyd’s sculptural installation references a fictional alphabet described by the feminist science-fiction writer Ursula Le Guin in her 1985 novel Always Coming Home, an anthropological study of the future Kesh society that interweaves prose, verse and diagrams. The book’s coda includes an infographic of the 32-sign Kesh alphabet – the basis of Le Guin’s invented language and, in turn, her attempt to imagine an alternative social model that is matriarchal, secular, environmentally sustainable and classically socialist.

Kesh Alphabet spells out the Kesh noun banhe, which translates into English as ‘inclusion’, ‘insight’ and ‘female orgasm’. In the gallery, however, one first encounters this word in the abstract, untranslated and further de-familiarised through Floyd’s typography and the work’s dispersed composition. Formally, the vivid prisms invoke oversized children’s building blocks, referencing Floyd’s interest in historical movements that explored design for play, such as Bauhaus, and perhaps also the ‘blocks of shaped and sanded mill-ends’ and ‘lettered wooden tablets’ that Kesh children used as toys. (1) Arranged as a permeable field, these monumental letters mark out a discrete venue for gathering and activity within the expansive Central Court of the Art Gallery of New South Wales (AGNSW).

In part, the work riffs on the pastiche of architectural styles that collide in this space, which functions as a kind of Greek agora beyond the AGNSW’s neoclassical facade, incongruously dominated by the rigid geometric design of a modernist ceiling grid. During early research, Floyd also observed the gender dynamics at play in this zone of heightened social and pedagogic activity. On the one hand, she saw the masculine character of the architecture echoed in the dominance of male artists in the collection displays; conversely, the audience inhabiting the Central Court was overwhelmingly female. She came to think of this female presence as ‘the Gallery’s circulatory system’, the ‘soft’ life force animating its ‘hard’ infrastructure. (2)

Kesh Alphabet embodies this feminine principle, extending up into the ceiling grid as a disruptive gesture that literalises Floyd’s desire to ‘recolonise the space’ with a feminist perspective. In this regard, the work reflects her interest in the legacies of feminist design, which emerged during the women’s movement of the 1970s as a means of producing inclusive, democratic spaces for protest and self-organisation. Floyd’s choice of the Kesh word banhe registers her desire for feminist change more emphatically, affirming a strictly female space of experience and pleasure, which Le Guin aligns linguistically – not by coincidence – with a shift in perception and the redistribution of agency. Writ large in the heart of an indisputably patriarchal institution, the work is offered as ‘a spell or invocation’. Untranslated and hence freighted with potential, it conjures a different future while reminding us, as Le Guin does in Always Coming Home, that ‘language is not meaning’ in itself but a system through which world views are shaped and expressed. (3)

(2) Unless otherwise noted, all quotes are from interviews between the artist and author, August–October 2016.