Eric is based in Queensland, but also spends a lot of time in his province in Papua New Guinea, working with his family and community, as a kind of collaborative exercise in creating these paintings, which he started making in, I think, 2017.

For Eric, the works are ... they evoke the kind of physical expression of sport, the kind of masculinity and the scrum. This installation of paintings is like a scrum for Eric, and it's very visually intense, but also kind of suggestive of the hyper-masculinity of sport, but at the same time, all of the traditions and rituals associated with warfare.

Eric, when he saw this installation presented in this form and lit in this way, in such a kind of vivid, beautiful, almost sparkling installation, he referred to it as the beating heart of the space. 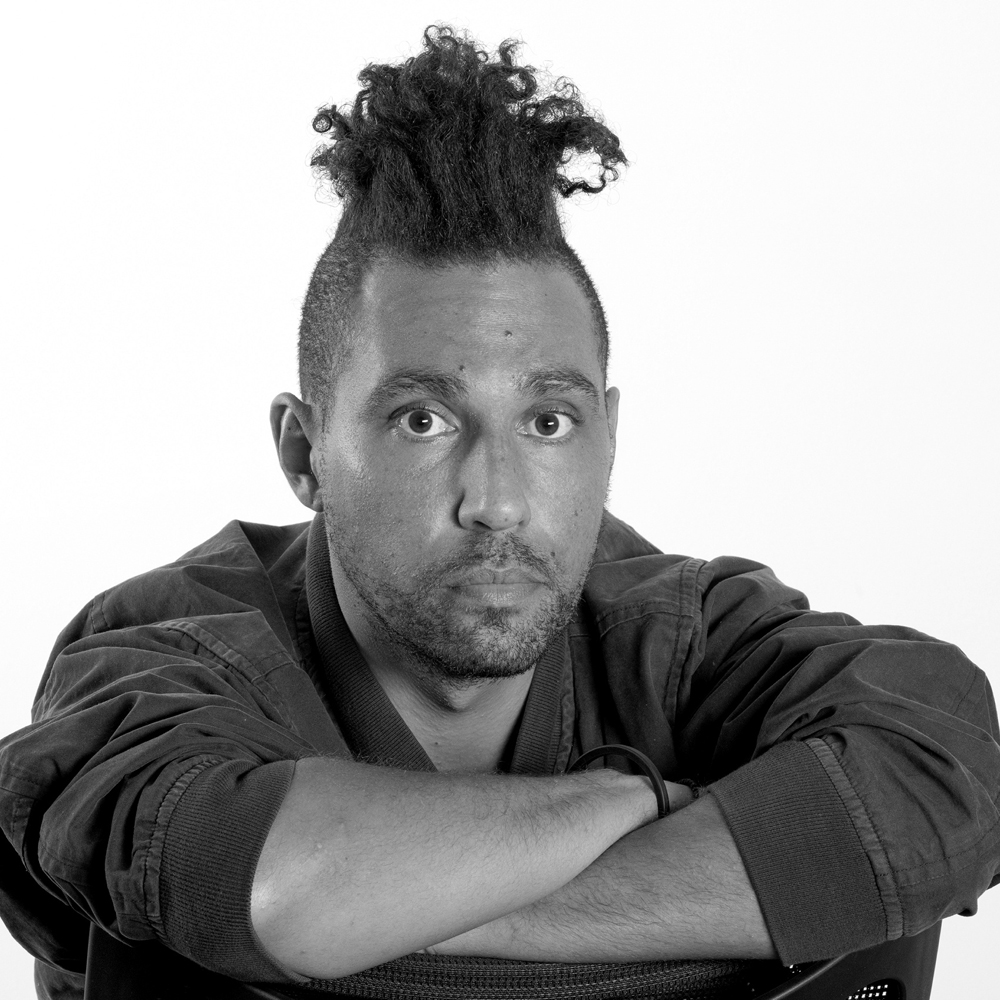 Eric Bridgeman is a multidisciplinary artist. The dominant focus of his work involves the discussion of social and cultural issues, often using the theatre of sport as a springboard for his ideas. Recent visits to his homeland have allowed Bridgeman to explore the realm of ‘tribal warfare’ in the PNG Highlands, which mimics the drama, colour and trickery seen in its national sport, Rugby League. His people, the Yuri Alaiku clan of the Gumine district in Simbu Province, have crafted shields (Kuman) with bold, optically stunning motifs for countless generations and these traditions have shaped his current practice.

Shields might seem a simple affair and possibly are. We may be apt to think of them as protective, less as assertive. And when they have a fictional aspect, as these shields do, what is the fictional account that is being made manifest? Every fiction involves its own truths. Whether the fiction masks the truths or reveals them, as it were, under wraps, is a matter for conjecture. With objects that have a precise geographical origin they take on the aspect of a flying carpet that can transfer us hither and yon. Such objects unleash a set of possibilities but also make plain the determinations in play. They are historically inscribed but at the same time sketch out or point towards futures that can scarcely be imagined. Might we think of the enemy within and the enemy without? The fiction is a speculation, a statement of what might be and is. It can look to the past, too: to the ficto-actual world of the Ancestors. The enemy can be warded off through a sort of creative homeopathy: a more-or-less small dose artfully applied.

Who in this Age of Now is the enemy? Where does it reside? How does it proceed? In its demands for order what is being ‘urged’ and for whom? What shall we say about the issue of innocence?

Art and the painted surface and seduction. We may remain indifferent and there may be art that actively seeks disengagement. The indifference of art may be likened to the indifference of nature. Art and nature are worlds that are both immediately accessible and terminally impenetrable. Can we say that art is apt to fuck you over and doesn’t give a damn?

The shields matter, though equally we can see them disposed of by the roadside. How then, if ever, do they acquire the patina of use, renewal, abandonment? My own leaning tends towards the cast-off. The shields of others may be trophies, but one’s own, what of them? Do they get invested somehow with a secret power or aura?

The football guernsey is closer to the skin than the shield. But then the football guernsey is less about protection than identification. The shield announces belonging and ownership; it is a guernsey of sorts but hovers before the body. It places the bearer in a position of invisibility. The shield operates in a zone of high visibility; it cannot be taken as a representation of the body, for it is both more and less than the body.

Now, was the shield to bear the image or the insignia of the other, what then? What if the other were forced to confront themselves in the act of encountering their presumed opponent? This tilts the notion of the alter ego in the direction of ‘same but different’. We might wish to argue that identity begins with negation, but also to add that the enemy is the true pillar of the self. Might we argue, then, that this array of shields represents a search for the ennemi idéal; and the texts that appear on the verso, a more-or-less inscrutable set of self-announcements meant ‘for my eyes only’? Doodles of self, we might say, a secret array of incantations that are the true bearers of protective force if not intent.

My name is Eric Bridgeman. I am from Redcliffe, Queensland and Chimbu in Papua New Guinea.

The work I'm making for the National is a composite painting installation called "Sikiram" or in Papua New Guinean Tok Pisin "Büng".

Been practicing for up over 10 years. Starting with photography, I branched into performance and installation, sculptural works and basically, I came to look into shields from my area in PNG, particularly belonging to my clan the Yuri Alaiku clan. This is the Kuman or the Wahgi shield. It's used in close combat and so you're actually dancing around, with about three or four or five people with spears and bow and arrows sort of behind the shield and so these other people are sort of doing the same thing and watching really powerful, colourful design there but the reason why I was interested in sort of reviving this is because I knew that the designs that are painted and that appear on those shields are quite powerful but also have an aesthetic in itself even if separated from the idea of fighting. Not promoting violence but promoting sort of the art of it, of the object.

Well the main reason I decided to show my variation of shield designs for the National was because I am also Australian. I've spent most of my life here as well. They're two permanent places that exist in my life and of course influence my practice.

I'm dealing with certain things that I find troubling within the code of rugby league, and the sport, but it's also filling that spot in my heart that wants to love the sport but for some reason, I can't. So that's where it is. It's conflict. And whether I like it or not this is what I piece together, these parts of culture and visual language and current events and I put them together. They might be abstract and a bit absurd but I think that they are common ideas.