Fayen d'Evie's recent practise responds to an experience of blindness. All of the components of her installation, including the performance element that was developed in collaboration with Benjamin Hancock, a choreographer, are meant to be thought of and treated as essays. But these aren't a conventional kind of essay.

There's also a work in the show that has a vibrational frequency. There's a sound element, but also an element that we feel through the pulsation of the vibration on the work itself. Across all of these works are particular phrases inscribed again and again, and that is: "We call to you with vibrational poetics and the story carries on and on."

2019
granite, quartz, sandstone, marble, bronze, charcoal, ochre, hardwood, transducer, resonators, amplifiers dimensions variable
This project has been supported by the Australian Government through the Australia Council for the Arts, its arts funding and advisory body and by Atelier, Art Gallery of New South Wales.
Courtesy and © the artist
Photograph: AGNSW, Mim Stirling

2019
granite, quartz, marble, bronze, ochre, charcoal
50 x 70 x 145 cm
This project has been supported by the Australian Government through the Australia Council for the Arts, its arts funding and advisory body and by Atelier, Art Gallery of New South Wales.
Courtesy and © the artist
Photograph: AGNSW, Mim Stirling

2019
performance
20 minutes
This project has been supported by the Australian Government through the Australia Council for the Arts, its arts funding and advisory body and by Atelier, Art Gallery of New South Wales.
Courtesy and © the artists
Photograph: AGNSW, Diana Panuccio

2019
performance
20 minutes
This project has been supported by the Australian Government through the Australia Council for the Arts, its arts funding and advisory body and by Atelier, Art Gallery of New South Wales.
Courtesy and © the artists
Photograph: AGNSW, Diana Panuccio 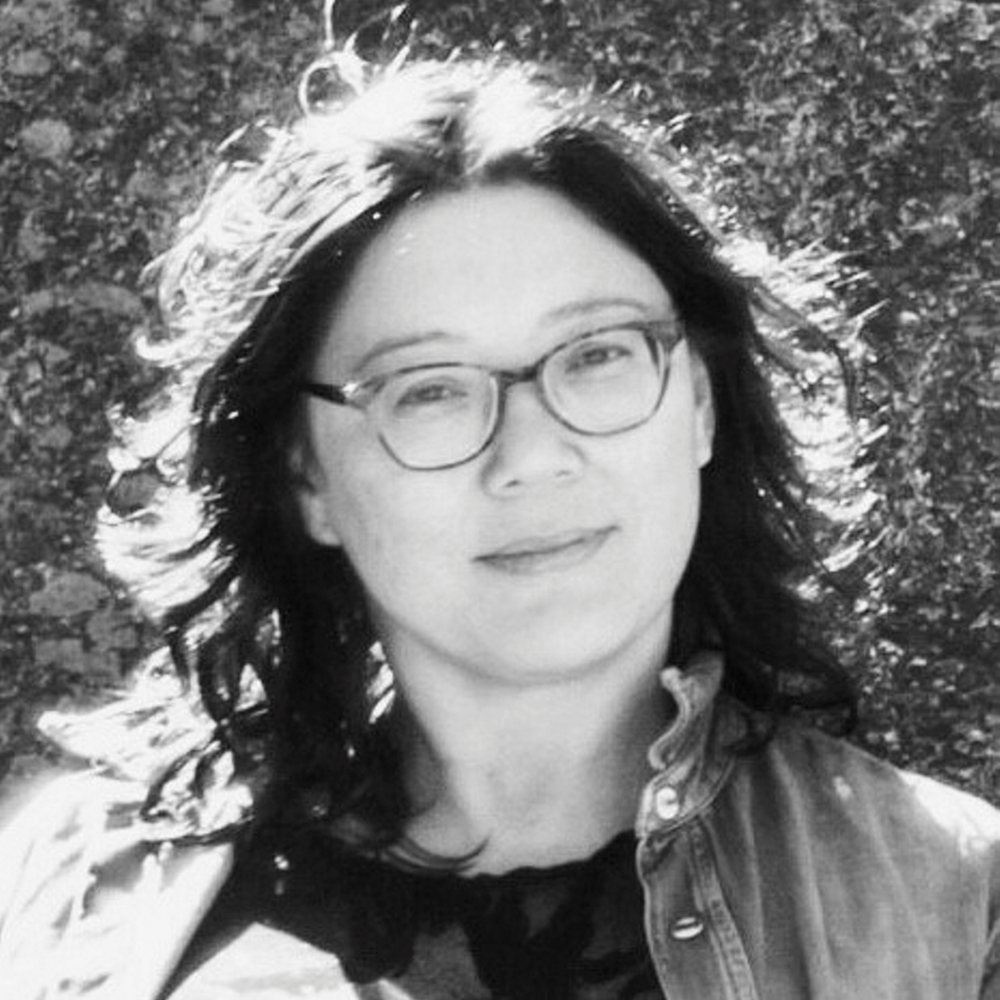 Fayen d’Evie’s projects are often conversational and collaborative, and resist spectatorship by activating diverse audiences in embodied readings of artworks. D’Evie advocates for the radical potential for blindness, arguing that blindness agitates ocularcentric norms, and offers critical positions and methods attuned to sensory translations, ephemerality, the tangible and intangible, hallucination, uncertainty, concealment, and the invisible. D’Evie is the founder of 3-ply, which investigates artist-led publishing as an experimental site for the creation and dispersal of texts. With artist Katie West, d’Evie co-founded the Museum Incognita, which revisits neglected, concealed or obscured histories through embodied encounters.

In Essays in Vibrational Poetics (2019) Fayen d’Evie questions how to ‘publish’ fragments of messages for future audiences to detect, recognising that in the event of the collapse of civilisation and ecological calamity, these audiences might not be human. As her sense of sight continues to diminish, d’Evie turns to gestural, tactile and vibrational forms of communication.

Publishing is a visceral experience, involving the visual, tactile, aural and olfactory senses, hefted for centuries with the geologic weight of metal and wood. While technology has removed much of the physicality of printing, the language of publishing still carries the traces of this bodily connection. The anatomy of type is described using a human lexicon, with individual letterforms composed of ears, shoulders, arms, legs, feet and tails. The ‘body type’ of a published page is embraced by an armature of headers, footers and spines. Wood fibre is impregnated with carbon, punctuated by metal. D’Evie both expands and challenges traditional materials and modes of publishing. While her speculative posthuman typographies are strongly connected to the human origins of typography and printing, her work is also embedded with messages of another kind. In The National 2019 d’Evie publishes a set of experimental ‘essays’ as propositions for carrying story through stone, wherein messages may be carved, heard and felt as vibrations, or performed through gesture. Held within these lithic essays are fragments that assert the importance of women writers, publishers and painters, and of those whose experience of the world challenges dominant normative ideas of the sensing body.

In Essays in Vibrational Poetics four ‘publications’ in stone carry poetic fragments of messages left for future posthuman audiences. Each ‘essay’ can be understood as a means of testing out speculative forms of publishing and typography that go beyond the traditional thresholds of written language. D’Evie introduces the fleeting traces of dance, gesture, touch and vibration as ways of carrying these messages. In Essays in Vibrational Poetics. Acknowledging Margaret Woodward, Núria LÓpez, Mrs Eaves, and women who painted the caves in tactile poetics, d’Evie uses the experimental font Blind Words (2015) by Núria López, which combines Braille and Latin alphabets. In other essays, American Sign Language writing inspires gestural, poetic communications, while inscriptions in the font Mrs Eaves pay homage to women typographers. These experimental messages ‘published’ in stone offset the weightiness of geology with the transience of gesture. Mineral seams in rocks are reminiscent of the spines of books, or of dancers or the complex bodies of the more-than-human world.

In collaboration with dancer Benjamin Hancock and sound artist Bryan Phillips, d’Evie’s score is made public and type is again sensorily re-embodied through performances of vibrational poetics. Hancock ‘inhabits’ d’Evie’s speculative typographic forms, inflecting her messages with typo/choreographic gestures of ligatures and limbs. Phillips’ low frequency vibrational compositions are sensed via non-visible vocabularies, signals that may also be detected by non-human species of animals and plants. In Essays in Vibrational Poetics Fayen d’Evie inscribes a new embodied typography, where the latent gestural qualities of type are released via movement and dance. Through touch, listening, scoring, puncturing, engraving and movement, the body is reacquainted with the visceral origins of publishing. Here, a new form of languaging emerges, a kind of ‘glyphic choreography’, in which d’Evie’s publishing in stone activates other sensory readings, transcending the present. Fragments left for future sensing audiences to stumble upon.

My name is Fayen D'Evie. I'm an artist based in Muckleford, which is in Dja Dja Wurrung country, north of Melbourne. And my work in The National comes out of an experience of blindness.
My instillation for The National is Essays in Vibrational Poetics. This consists of four different essays or attempts at writing language for a post-human audience. The materials that I've chosen depend on the different essay. In one case the essay, which engages with tactile poetics, is made from granite and Jurassic marble from bronze braille and ocher and charcoal.
And these materials are chosen in particular because the granite will outlast civilization. So thinking about ways that this artwork can truly end up in the landscape. And be encountered by a post-human audience. Other materials range from, for example, another work is a choreographic work which explores the body as material.
A body as a vehicle for writing. And how the body operates as embodied typography. And this is a collaboration with dancer, performance artist, Benjamin Hancock. When we first began developing this work in London, working together with another artist, a blind sculptor, Aaron McPeake who makes sculptures out of resonant bell brass. And we were working with the idea of what would vibrational poetics be if carried through the body?
These ideas around touch and sensuality around slowing down, around calling attention to the crises that we're in now, this kind of precarious time. And about valuing the ways that we can acknowledge one another. The term essay, to me, not only evokes writing, but also an attempt, an essay at something. And sometimes in a multiplicity of ways. For example, in three of the works braille poetry is included. And these are intended for a post-human audience.

But of course they're also intended for an audience of our time. And the braille poetry is partly a way of me introducing an invitation to touch. But it's also a way of privileging blindness within an institution like this, where usually, blind visitors are relegated to a very secondary experience.

There's one work which is a wooden box that has tactile paintings within it, and bronze braille. But it also has resonators and an earthquake simulator. Because that work investigates both audible and sub-audible frequencies. One of the works engages with tactile poetics.

And in particular with ideas that I have around women being the beginning of both painting and writing in the palaeolithic caves. And I think, for me, this re-writes the history of art as beginning with women. And it's based on certain archaeological papers that have found hand prints of women en masse within these caves.

There's also an honouring through these works of the propositions of others that I think have been particularly revolutionary or, at least innovative and informative for my practice. For example, I include a font called Blind Words by Nuria López who's a Spanish designer. And she's developed a way that you can include both braille and printed text in the same typography. So my hope is that people enter the instillation and find their own way of engaging with the works. And then can converse with others about that.