Gordon Hookey is primarily a painter, an Aboriginal man who's based in Brisbane but originally from northern Queensland. And he's currently embarked on a major multi-painting project painting a history of Murrayland, as he would call it, or a history of the territory we now know as Queensland from early pre-European contact or invasion times through to the present.

But for The National, he sort of stepped out of that project briefly for us and he's painted a wall mural. So something that's rendered quite quickly. Very bold forms, very bold technique. It's the wall mural which is something that Gordon does occasionally. It's something that's constructed to address a public very directly, very sort of frontally. So we have in this mural, the whole length of its almost 10 metre surface covered with kangaroos armed with batons or weapons of some sort, it would appear, staring out at us or facing us and pointing to a particular figure in the painting who would appear to be based on Pauline Hanson.

Gordon uses the kangaroo figures often. The kangaroo stands in for Aboriginal Australia and it's a strong defiant kind of image all the time. So it's confronting us. For here it's confronting this figure that seems to be based on this right wing Australian politician and a number of her kind of thoughts or fears are visualised in the painting. And there's a quote in the top right of the painting which is actually from Malcolm X. The quote reads, "If you're not careful, the newspapers will have you hating the people who are being oppressed and loving the people who are doing the oppressing."

And it seems to sum up what Gordon is trying to do with this quite confrontational painting, is actually address what is in his mind this great concern about the normalisation of race hatred through our mainstream media in Australia. So it's a really potent, powerful, defiant work to have at the heart of the exhibition. 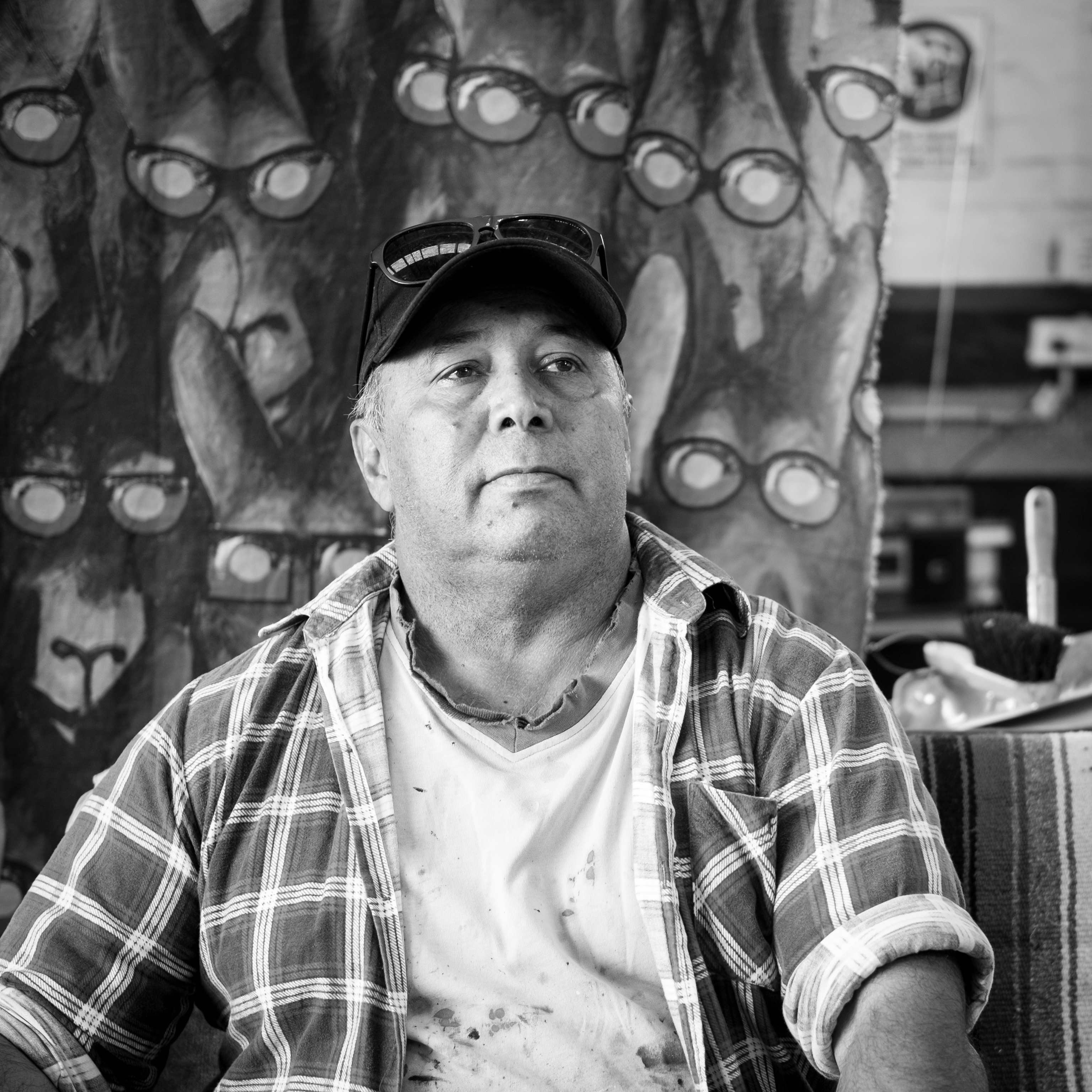 Gordon Hookey locates his art at the interface where Aboriginal and non-Aboriginal cultures converge. His style and approach is distinctive in its vibrancy and best known for its biting satire of Australia’s political landscape, its leaders and representatives. Hookey’s work combines ﬁgurative characters, iconic symbols, bold comic-like text and a spectrum of colours. His perspective comes from a divergent, activist positioning; his work challenges hierarchies, skewering the status and integrity of the ‘elite’ while working to bolster the position of the marginalised and oppressed. Hookey is a core member of the Brisbane-based Indigenous collective proppaNOW, alongside artists including Richard Bell, Vernon Ah Kee and Jennifer Herd.

The art of Gordon Hookey is embedded in satire and cultural symbolism, layered narratives and unique perspectives. Working across painting, works on paper, sculpture and installation, Hookey has employed these qualities to develop a professional practice that resonates with Aboriginal and Torres Strait Islander Australia. Reaching a broad audience, his work also provides pointed insight and commentary on contemporary and topical ideas, regularly expressed through humorous wit and often with a political slant.

Hookey’s artistic practice, more generally, is a reflection of his personality and knockabout persona. It is this human trait that strongly reverberates throughout his paintings and connects deeply with the character of Aboriginal and Torres Strait Islander communities; a framework Hookey works within. The artist’s cleverness can also be seen in the characters and subject matter that feature in his artwork. This blak humour is unique. Not just in the way humour is expressed or embellished but also in the slight variations of its incisive narratives.

In Hookey’s work the cultural symbolism of portraying Aboriginal people alongside impressive animals native to Australia is both deliberate and telling. Both have maintained a long connection to this country. He uses this not just as a defining characteristic but also an enduring one that echoes a complex symbolism of place. How we, and more specifically Hookey, see the nation’s social and political landscape and the people that inhabit this space is a key theme of his artistic practice, one often approached in an entirely layered context.

An amalgam of political satire and cultural agency is carefully crafted when Hookey undertakes new work. He proudly portrays Aboriginal people and native animals as defiant, proud and stoic. There is also an element of coolness that ripples through this particular subject matter. Hookey has developed an aesthetic that sees native animals cheekily taking on human qualities and introduced animals cast as the provocateur, authoritarian in nature.

Hookey puts a lot of thought into his use of symbolism. A play with words and text has also featured heavily in his artwork. The aim and use of text within his art practice is an important aspect in addressing pointed issues such as racism, particularly in sport and in Australian society in general. Hookey also uses text to amplify the language of Aboriginal humour and the unique coded vernacular that surrounds it.

This has resulted in the work of Gordon Hookey being held in most state gallery collections throughout the country. Featured in major exhibitions both here and overseas, his work is remarkable for its maturity and ambitious scale. Hookey’s practice continues to grow, not only in the execution of ideas and the application of its intent but also through the exploration of his very own type of blak humour to a wider art public.