Brisbane and Los Angeles, US

This is a work by an LA-based artist, Jemima Wyman. Jemima's work interrogates ideas of identity, gender, and politics; often through using the transgressive motif of the mask. The mask motif is usually assigned to superheroes and serial killers as a way of expressing identity, yet also protecting anonymity.

This is Jemima's largest work to date in the Aggregate Icon Series. The Aggregate Icon Series is a series she's been working on since 2008. She's essentially spent the best part of the last ten years building up this extraordinary online archive of protest imagery. This is protest imagery from all sorts of global movements from around the world. From the Occupy Movement, to Pussy Riot, to the Zapatista Army of the National Liberation.

She has then put in the filter of red, white, and black. That's the very politically charged palette she's working with. That's brought up all the red, white, and black imagery. She's then selected a number of these images, digitally cut them out, collaged them together, it's been printed on this vinyl wallpaper, and then is reconstituted in this space in the form of a rose window. One of the sort of Rosetta windows traditionally seen in old churches and cathedrals in Europe.

As well as taking this very traditional form of the rose window, this work also reads as a modern-day Mandala. The effect is of a kind of kaleidoscopic language of resistance en masse.

The title for this work runs to six A4 pages, because Jemima has detailed each and every image that she's used in this huge, elaborate collage. She's detailed the image: who the protestors were, when the protest took place, and what the cause of the protest was. All of this content is retained in the title, and the work isn't just reduced to its formal elements. 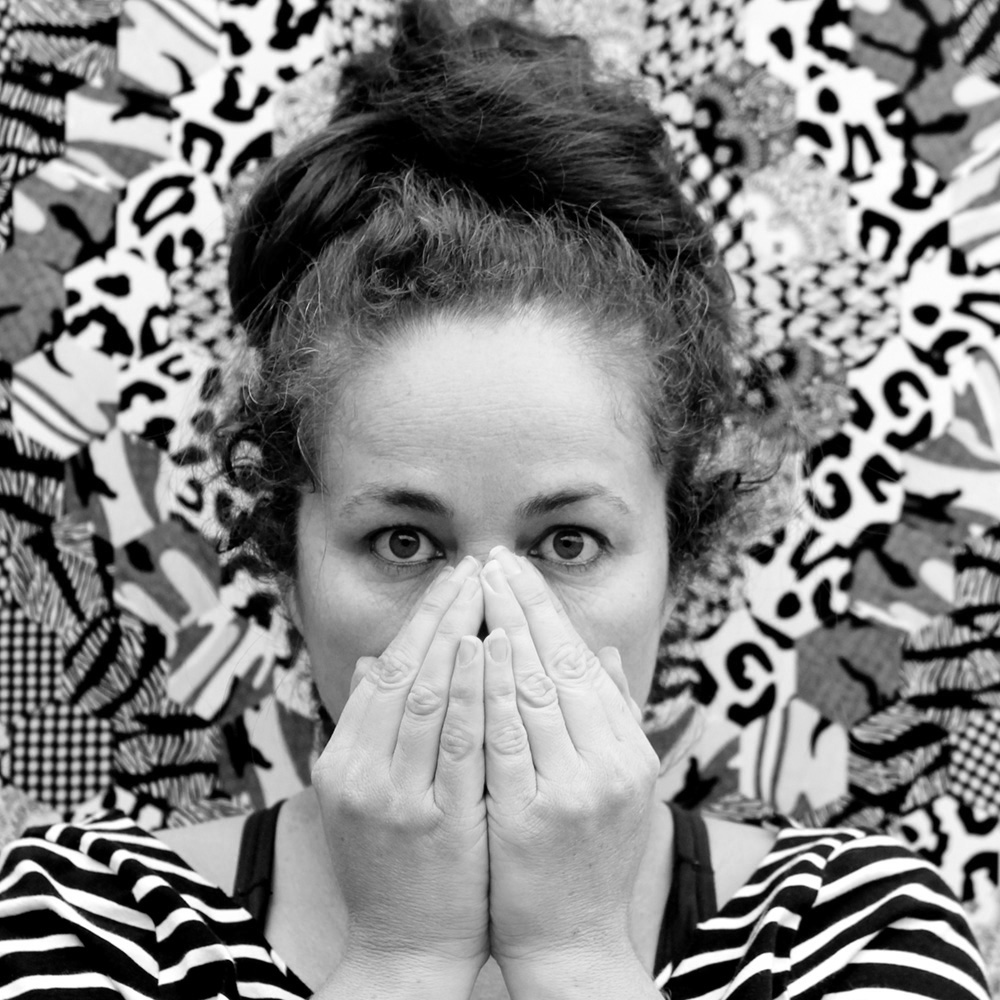 Born 1977, Sydney. Lives and works Brisbane and Los Angeles, US

Jemima Wyman’s practice investigates camouflage as a social, formal and political strategy. She works with various mediums in order to detail the playful subterfuge present in the dynamics of camouflage. Wyman’s recent work explores the theme of visual resistance through patterning and masking, especially when used by marginalised groups to gain power (counter-power) in zones of conflict. Through her research she has collected a vast archive of masked protesters and liberation armies engaged in this very subterfuge. Her work has identified recurring patterns and trends that groups use for creating a collective identity; she refers to these coverings as ‘communal skins’.

I am no-one. I am everyone.

Throughout history, artists have used masks as a formal device to sculpt and manipulate the human form, and to interrogate issues of identity, gender and politics. To cover one’s face with a mask is a powerful, polarising and potentially menacing act. A smile, a furrowed brow, a wrinkled nose, bulging eyes – our expressions reveal emotion and reaffirm convention without speech. When a mask conceals one’s face, the assumed norms that shape our behaviour can be both denied and confirmed. Humans are dehumanised. Individuals become anonymous. The mask-wearer slips into a sliding space bookended by superheroes and serial killers. When worn, a mask may permit an individual to simultaneously transgress social boundaries while belonging to a group. In this way, identity is expressed yet anonymity is protected.

Jemima Wyman is an Australian artist living and working in Los Angeles who is engaged with global issues and the politics of identity. Wyman’s work explores the aesthetics of protest and the possibility for art to champion social change. In a world of state surveillance and profiling and a post-truth media, Wyman sources many of her images from the ultimate mask, the internet. She has spent the better part of a decade witnessing protest activity, creating an extensive archive of masked protesters. In her Aggregate Icon series (2008–) Wyman prints, hand-cuts and collages images from protests that include the Occupy movement, the Zapatista Army of National Liberation and Pussy Riot to create a kaleidoscopic language of resistance en masse.

The most ambitious of this series to date, Aggregate Icon (Rosetta RBW) (2017), takes the form of a Catherine or rose window but with a twist, as Wyman incorporates a spiral within the image. In the great gothic churches of Europe, the ornate Catherine windows were a channel for worshippers to move beyond life on earth and enter the realm of the divine – manifest, hidden and symbolic. At Carriageworks, Aggregate Icon (Rosetta RBW) reads as a modern-day mandala located within the structure of a 19th-century industrial rail shed, proposing a dialogue between the work, the viewer and the architecture.

Curved paisley shapes and stripes of the keffiyeh feature throughout Aggregate Icon (Rosetta RBW), which has a palette of red, black and white. Historically, these colours have their own political affiliations – red aligned with socialism and communism, black associated with fascism and anarchism, and white, the colour of peace. They are also colours used by the Russian Constructivists, who in the wake of the World War I created art and design to aspire to a new utopian ideal. When presented as one, Wyman’s images form a strange ‘collective skin’, a place to imagine a world where the ideologies that divide us are collapsed, uncertain and unfixed.

The long-form title of Aggregate Icon (Rosetta RBW) methodically lists the protest, place of protest and date of protest for every image. This information becomes a written archive of the visual composition and a testament to each protester, a reminder that the strength of a group relies on the participation of individuals.