Speaker 1: Julia Robinson's made a new series of works for the national that are somewhere in between bodies and fruit. They almost seem to be splitting open and exploding at some points. At other points, they're being penetrated by these very pointy, sharp, spear-like objects. Julia's worked with beautiful and sumptuous textiles as well as with gold plating. Then one of the key materials that she's used in this series of works are gourds. So the actual plant material, she has emptied them out. They're usually filled with seeds. I guess one of the reasons she's used the gourd is not only for its shape, but its relationship to this idea of fecundity and in this work, she's really looking at that particular idea of birth and ideas around that.

Julia is someone who is really interested in ritual. She's interested in the way that humans have used ritual for so long to explore issues like birth, sex, and death. Julia works in Adelaide. A lot of her work over recent years has looked at the male form. Her work is often quite a little bit sexy, a little bit naughty. In these works, she's really moved into the female form. So you can sort of see that as you walk between these incredible sculptures. 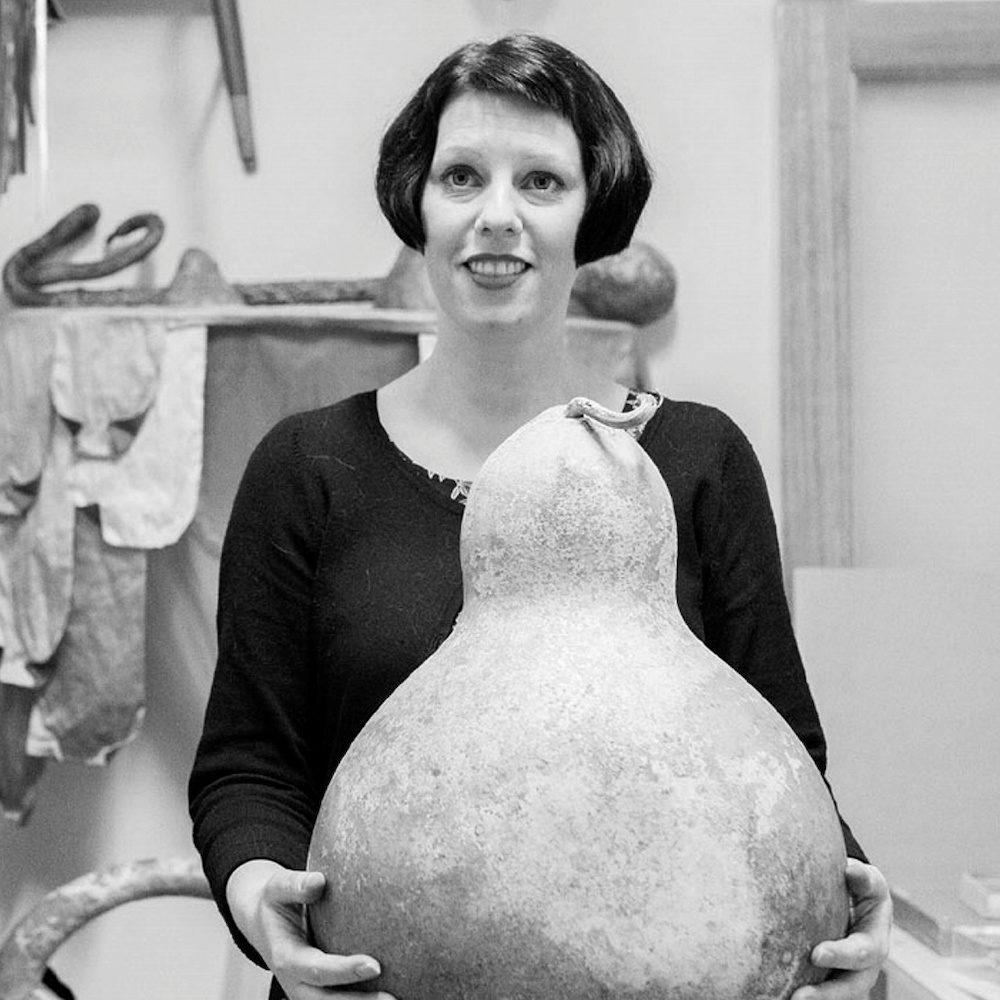 Julia Robinson works in the fields of sculpture and installation. Her practice reflects an interest in religion, the afterlife and death, and how humans address these concerns through ritual. Drawing on established belief systems and sources, including myths, fairytales and European folklore, Robinson examines our discomfort with the finality of death. Recent works draw on depictions of harvest, fertility and resurrection rituals in folk horror films such as The Wicker Man (1973) and Wake Wood (2011). Robinson currently lectures at Adelaide Central School of Art. Her work is held in the Art Gallery of South Australia, Adelaide, Artbank and private collections.

Cold, dusty skin swells, ballooning outwards from the perfectly round aperture of a gourd. Tongue or tendril, shoot or sprig, a shock of blue-smocked fabric emanates from an amniotic abyss. Coiled and wrapped, clothed and dressed, silks the shade of a tender bruise adorn the fantastical forms of Julia Robinson’s new work. These otherworldly objects emerge from the suspended animation of their wall fittings. An exotic banquet of surfaces is offered to the viewer, ranging from perfectly smooth metals (polished brass, steel and gold) and intricately smocked, slashed or jack- plated silks, to the raw, untreated surface of the gourds. Together, they mutate, hatch, split and pierce, invoking the transitional state of metamorphosis.

Exploration of transformative states is an intrinsic part of the Adelaide-based artist’s practice. Robinson, who works in the fields of sculpture and installation, has an enduring fascination with sex and death. Drawing on a multitude of sources including myth, superstition, folklore and calendric celebrations rooted in the changing of the seasons, her work reflects an interest in how humans address existence and mortality through ritual.

Robinson introduced gourds into her work in 2016 with The Song of Master John Goodfellow. These symbols of fecundity erupted into her practice with bawdy ebullience, referencing ceremonial vestments and the intricate techniques of Elizabethan-era clothing. In Long Ballads (2017), Robinson extended her investigations into the realm of adornment and early-modern costuming with a sensitively executed collection of gourd-based works. For The National 2019 Robinson returns to this fertility motif – slicing, dressing, piercing and gold plating the gourd, traversing the dichotomies of interior and exterior. She describes this new body of work as ‘a dialogue with Hieronymus Bosch about ritual, growth and fecundity by way of his remarkable painting The Garden of Earthly Delights (c.1504)’. (1)

For Robinson, Bosch’s garden is alive with the processes of fertilisation, germination and ripening. In his hands, the Garden of Eden becomes a site for metamorphoses, redolent with the mutating, hatching, splitting (2) of the plant world. The central panel of Bosch’s biologically and metaphorically charged painting became a touchstone for this new body of work, with key compositional elements of the painting finding their way into sculptural forms. Thus, a hoop holding a human figure is echoed in the warty loop of a gold-dipped gourd, and the form of a fleshy turret appears, pierced by a brass spike. At the centre of Bosch’s painting, groups of feverish revellers recall the merrymaking of May Day and spring rites. Yet this celebratory place also contains the seeds of sin and damnation. Robinson artfully picks up and extends the atmosphere and contradictory forces at play in Bosch’s garden. Exposure is counterpointed by enclosure; the sanctity of skin and surface is disrupted and pierced; principles of order (culture) and disorder (chaos) are complicated.

Through the act of dressing, Robinson not only applies all the trappings of culture to these objects, she enacts a kind of transformation. Here, the artist becomes transmuter of observation, intuition and urge, mobilised to create new physical forms. Exquisitely finished surfaces, at once familiar and strange, reveal the subtle elements and tensions of a world in flux. In Robinson’s hands, these objects are emissaries of metamorphosis itself. Emerging from a constant state of becoming, they crystallise that which sits on the edge of conscious awareness.

(2)  See Marina Warner, Fantastic Metamorphoses, Other Worlds: Ways of Telling the Self, Oxford University Press, 2004, pp.29–160: Warner uses the terms ‘mutating’, ‘hatching’ and ‘splitting’ as organising principles to explore the notion of metamorphosis. For Warner, metamorphosis is a dynamic process that belongs to the natural world, yet it also threatens our sense of fixedness.