Kaylene Whiskey is a wonderful artist who lives in Indulkana, which is in South Australia. It's on the APY lands, which is some 130,000 kilometres of land sort of covering South Australia and the Tri-State border. Kaylene works through an arts centre called Iwantja, and some wonderful artists have come out of there. Kaylene is someone who has absolutely come out of the box and is doing something entirely different to what most people would think of as "Aboriginal art," in inverted commas.

She combines pop culture, lots of references to social media, and she watches things like NITV, so that's within the work. She combines these characters from TV shows and particularly music ... so people like Dolly Parton, Michael Jackson, David Bowie ... onto these canvases, which she paints almost like comic strips. Sometimes she carves up the space almost like a comic strip, in different boxes. She also then combines onto the surface of the canvas lots of language, lots of references to daily life in Indulkana, as well.

It's really because she, as a relatively young woman living in that community, is well aware of social media, is well aware of the impact of a variety of musicians and contemporary music makers today, but is really grounded within her culture and within that space in her country. We commissioned a work for The National called Welcome to Iwantja, which is the sign that used to sit on the Stuart Highway that told you how to get to Iwantja Arts Centre.

It is the real sign. It's made out of metal. It's got bullet holes, because people would use it for practise. She's painted on the sign. She's painted the black Wonder Woman ... which I love ... and Michael Jackson, and she's covered this sign in lots of sort of dot work, I suppose, and in her language, as well. 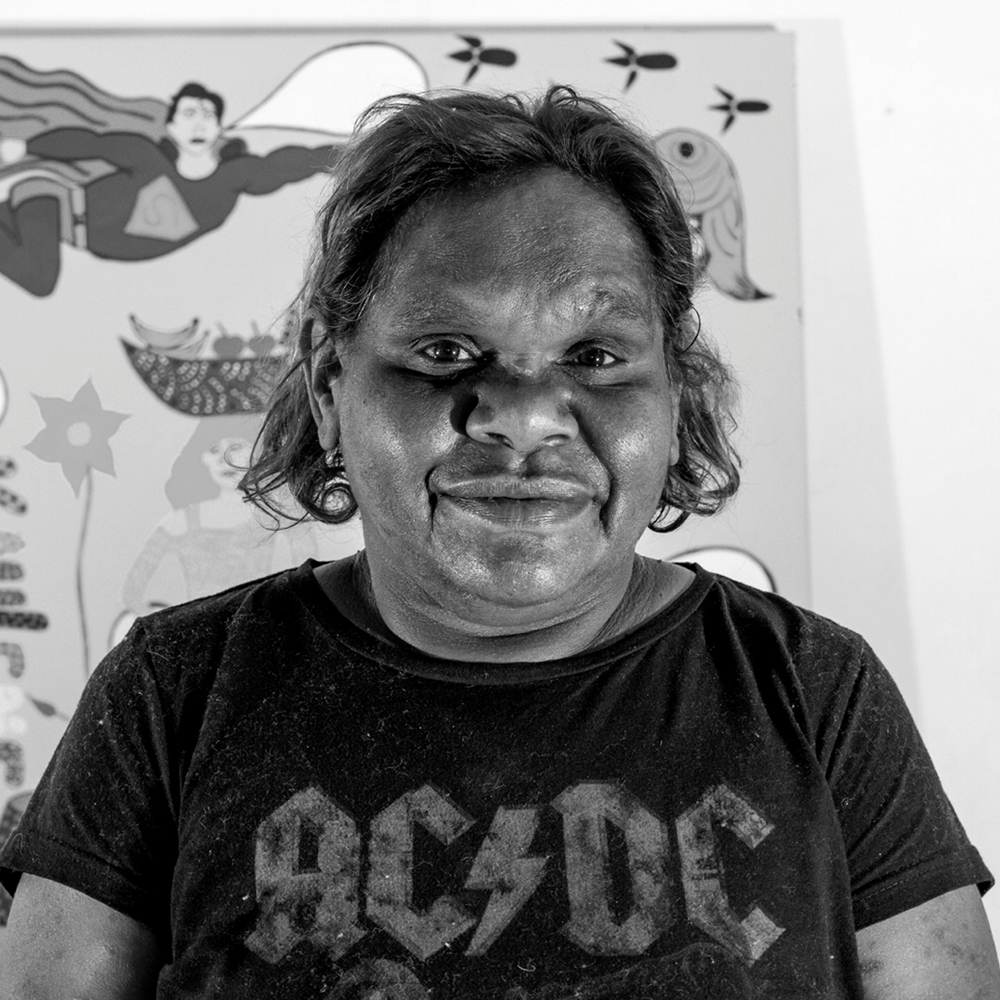 Kaylene Whiskey lives on the Anangu Pitjantjatjara Yankunytjatjara (APY) Lands in the remote north-west of South Australia and works at Iwantja Arts, Indulkana. Whiskey’s paintings celebrate heroic power, pop culture and cultural knowledge as the blended reality that is contemporary life in a remote Indigenous community of Central Australia. Her practice links the traditional culture of her community’s Elders with the experience of the younger generation, who have grown up with contemporary western influences like Coca Cola and Michael Jackson. Painted to a soundtrack of classic rock, pop and country music, Whiskey’s works are rich in irreverent humour.

‘Australia, your insects are as big as biscuits!’ squealed Dolly Parton onstage between songs during a concert I attended at a winery in the Hunter Valley in 2011. Performing on the green as it was getting dark, Dolly did her zippy Tennessee best to complete her set while the spotlight illuminating her tiny frame became a dancefloor for bugs. This is the moment I remember most of all, because it ruptured an otherwise highly scripted gig from a seasoned icon who has performed this routine countless times before.

I recount this story to Kaylene Whiskey over the phone and we chuckle over Dolly’s biscuit quip. I ask her if she is more a fan of ‘Country Dolly’ or ‘Pop Dolly’, to which she chimes, ‘ROCK ’N’ ROLL DOLLY!’ In Whiskey’s imagination, all of her favourite superstars (Dolly, Cher, Tina Turner, Michael Jackson and many more) are ‘rock ’n’ rollers’ despite the more concrete musical genres for which they might be better known or more formally classified. In my imagination, Whiskey could easily live in the lyrics of a Dolly Parton song. Kaylene does kind of rhyme with Jolene. One of Dolly’s most perennial hits, ‘Jolene’ was written and recorded in the US in 1974, two years before Whiskey was born in Indulkana, a remote Aboriginal community in the Anangu Pitjantjatjara Yankunytjatjara (APY) Lands in north-west South Australia. But it is not so much a heady seventies stardom that can be associated with Whiskey’s visual language. Growing up in the 1980s, Whiskey joyously mines the glitzy kitsch of a pre-internet era that birthed MTV and its entwined ideologies of globalised pop, consumer and media culture. It is precisely the compulsory globalisation of this late capitalist era that created greater ease for the importing of dominant forms of worldwide western pop culture into places faraway in time, to paraphrase an eighties pop song.

Casting her cherished superstars within comic book–like canvases, Whiskey merges fanciful pop narratives with her own personal experience and daily life in Indulkana, where she paints at Iwantja Arts. For The National 2019, a suite of these fame-filled paintings is presented alongside works painted on decommissioned road signs. Once pointing tourists in the direction of Iwantja Arts, when it was more focused on producing souvenir-type work, these signs will be adorned with the personalities Whiskey had on high rotation at the time of writing. The potential hit list includes frequently depicted famous friends, such as Dolly and Cher, right through to John Farnham and Kenny Loggins (‘but only when he sung “Footloose”’, it must be pointed out). Giving new and unexpected meaning to otherwise ordinary directional signs, these works literally point to the importance of community and place in Whiskey’s work, amplified as it is by the rousing fantasies of empowerment that abounds in the popular music o’ the time.