Khadim Ali is based in Western Sydney he is a Hazara man from Afghanistan although born in Pakistan where his family were exiled. He came to Australia around 2009, and he gained his citizenship a couple of years ago. He is interestingly trained both as a mural painter in Iran and as a miniature painter in Pakistan, and someone said to me the other day, "What we have there with the work from the National is the largest miniature painting in the world" which is probably quite true.

Khadim has made the MCA foyer wall mural which is an ongoing series of works specifically for the MCA for The National. It features a series of figures, demon figures, standing about and sitting, waiting. Now these figures are drawn a little bit from Rostam who is from the Book of Kings which is an ancient Afghani or Persian poem and it's a text to which Ali has gone back to a number of times in his career, and it's partly about his identification with this figure even as a child actually and then how that figure has been viewed from multiple perspectives in recent times. Demonised, on one hand, viewed as a hero on another and particularly the way in which that figure was co-opted by the Taliban who have persecuted the Hazari people for many years.

So when I visited Ali in his studio, he showed me his Australian passport which he hadn't had for very long and talked about how precious it was. Then he showed me through the images in the passport which are one might call typical or cliché, Australian scenes people playing cricket, Uluru, sheep grazing, surf life savers, etcetera. All those images on each page framed by foliage, by eucalypt foliage, or wattle, or similar, so Australian native flora.

He said that the images were really strong to him because they spoke to how he saw himself because if you look at the image, you're actually looking from behind that foliage and onto the scene. You're slightly distant from that scene; you're separated slightly from it, you're sort of lurking in the trees on the edge. As a new migrant, he felt that he felt both part of a place but also somehow kept on the edge of the place. That idea of being on the edge is of course also in a far more problematic way, the experience of many refugees and asylum seekers and kept in detention centres offshore Australia and elsewhere around the world, and it's an experience to which he can speak to from his own family experience.

So those figures on the wall here framed by this beautiful gold leaf foliage, so it's us looking in on those figures or them looking in on us. One of them has actually turned to face Circular Quay with such a potent sort of sight for arrival in Australia he has these figures just waiting. So he has this great density of just time passing of them waiting being excluded from a place and with the title The Arrival of the Demons, also this idea of demonization of the asylum seeker which is something he feels so strongly about.

So it is an extraordinary work where he's brought together the techniques learned in making really quite propagandist murals in Iran as a young man for training, and then there's miniature work which is being better known for since he arrived in Australia on to this scene. This massive painting which is many, many, metres long and about six metres high at its highest point.

The Arrival of Demons 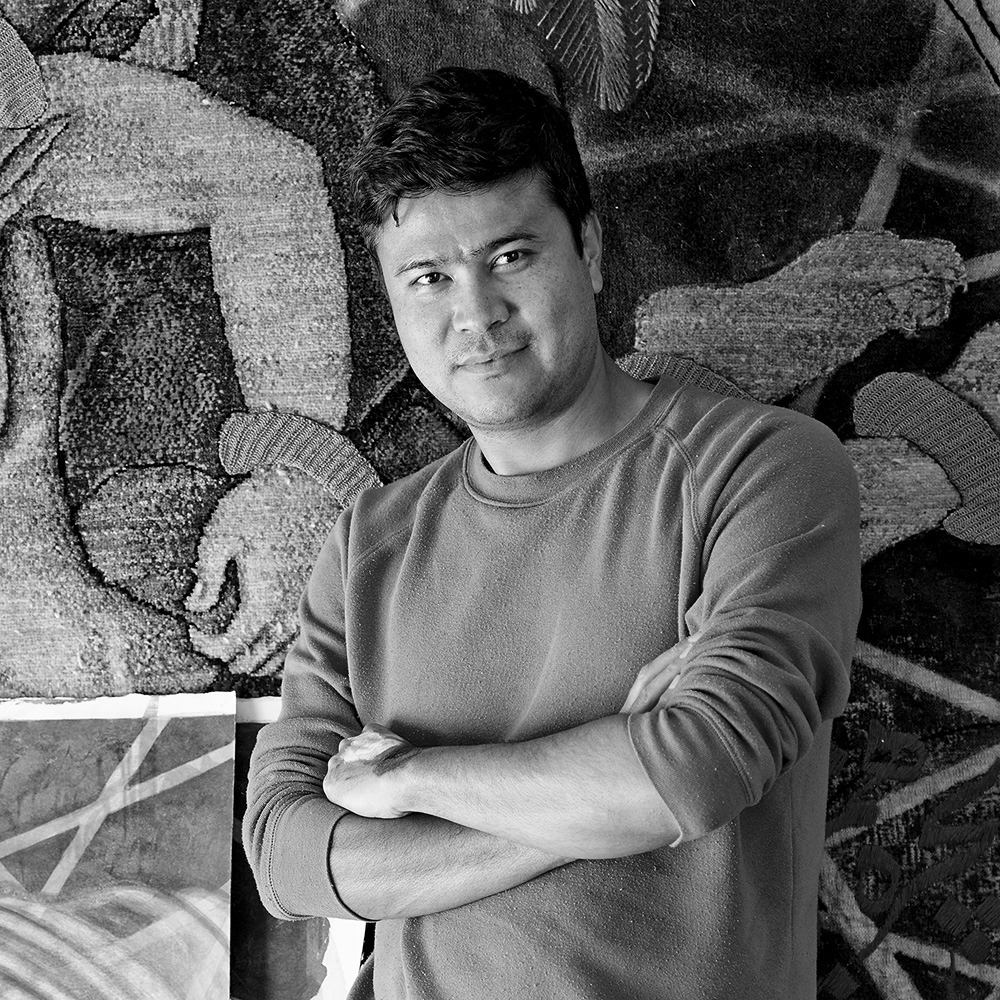 After growing up in Pakistan as a refugee, Khadim Ali was trained in classical miniature painting at the National College of Arts in Lahore and in mural painting and calligraphy in Tehran. Ali’s family is from Bamiyan (Hazarajat region), where in 2001 the colossal sixth-century Buddha statues were destroyed. The Shahnama/Book of Kings was read to Ali by his grandfather and its illustrations were his first lessons in art history. Through his work, created in the style of Indian Mogul painting, Ali explores and updates the motifs of the poem, telling stories about how meaning shifts as words and images are perverted through ideological adoption.

In The Arrival of Demon (2017), Khadim Ali’s massive wall mural adorning the Museum of Contemporary Art Australia’s Foyer Wall, a group of larger-than-life figures appears to congregate on the stairs leading up to the MCA galleries. Similar to the devil-like figures that populate much of the artist’s work, these characters, based on the hero Rostam from the tenth-century epic poem Shahnama/The Book of Kings, can embody both good and evil but here appear without wings, giving them a more sage-like presence. Most stand, hands crossed over bellies, stroking beards or leaning on the stairs. One appears to sit, elbows on thighs, looking out to the entrance of the Museum and Circular Quay beyond, the site of the first British colony, the arrival of the first ‘boat people’. While the poses of the figures suggest interaction, their mouths are closed. There is no apparent conversation here. They simply wait.

Flanking a staircase, the 15-by-seven-metre mural depicts the figures on a threshold, in some form of in-between space neither here nor there. They are backed by a wall of fiery red, licked with gold flame. Sprouts of resonant green curl up from the base of the work, immediately before and to the side of the figures, weaving into the same green as their clothing. Above them hangs a canopy of golden eucalypt foliage.

This pictorial construction is partly drawn from the illustrations that ghost the pages of the Australian passport, a document Ali, as a member of the Hazara community from Central Afghanistan, received only in 2015 after having lived in Australia since 2009. Images of apparently typical Australian subjects populate these pages, from a variety of native fauna to Aboriginal designs and various scenes of surf lifesavers, men playing cricket, scuba divers on a coral reef, people sunbaking and swimming at the beach, an empty outback dirt road, a surfer, a country pub, a road train, a drover, a camel train, and so on in a litany of national clichés. These vignettes are framed by overhanging native foliage that, as Ali describes, has the effect of separating the viewer from the scene before them. On receiving his Australian passport, Ali was struck by the way in which these images cast him as a viewer in a manner akin to his experience as a migrant – sat at the fringes, barely visible, peering in through the foliage upon scenarios to which he would possibly never truly belong.

This experience is both amplified and inverted in The Arrival of Demon. In a work drawing on his training in both miniature painting in Pakistan and mural painting and calligraphy in Iran, and created in paint and gold leaf applied directly to the wall over a number of weeks with the aid of assistants, the viewer is positioned looking out upon the wall from the public space of the Museum Foyer, confronting the figures at the fringes, massive and impossible to miss as they wait. The experience of interminable, soul-destroying waiting is exactly that which Australia demands of those seeking refuge here. But whereas all effort is made to keep that process and the torturous pain accompanying it publicly invisible, Ali has here dramatised it with great insight, aesthetic sophistication and impact on a site of significant public visibility and historical importance.

Khadim ALI discusses his work, The Arrival of Demons

Details of the making of The Arrival of Demons