In this gallery, we're standing with the work of Melbourne-based artist Maree Clarke. Maree grew up around Mildura, along the banks of the Murray River. She uses an array of natural, found, and salvaged materials to create her art. What you'll see in this space is a suite of very large, suspended necklaces made from river reeds, and glass cast pieces of river reed. You'll also see smaller necklaces that are using echidna quills, kangaroo teeth, and kangaroo sinews. All of these things she gathers from roadkill to assemble these beautiful bodily ornaments that traditionally would have been given as Welcome to Country, and a sign of safe passage. Also in the gallery space, you'll see two photographs, and they're photographs of Maree's nephews wearing the necklaces. One of the things I love about this echidna quill necklace is the delicacy, and the precision of the necklace. If you look really closely, you'll see that between every quill, there is a tiny, tiny gum nut, which Maree has had to drill by hand to join the necklace together. One of the questions that people often ask about Maree's work is, “Why are the necklaces often so large?”. When you look at these big, suspended necklaces, they're looped over and over. Some of them are 30, even 40 metres in length, and she will often talk about the idea of scale and supersizing her necklaces to represent symbolically the enormity of loss suffered by Aboriginal people and her community. 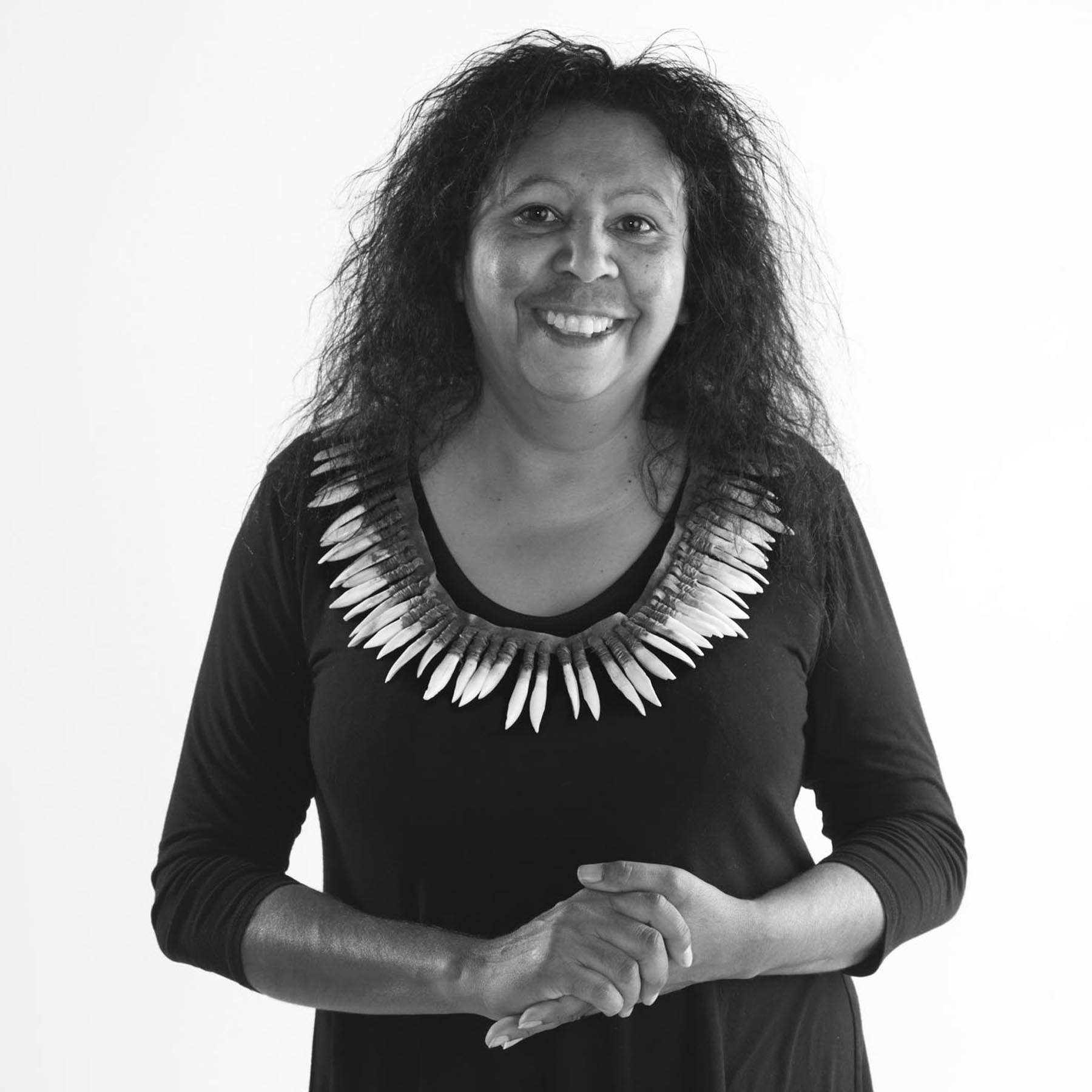 Maree Clarke is a pivotal figure in the reclamation and promotion of south-east Australian Aboriginal art practices. Her continuing desire to affirm and reconnect with her cultural heritage has seen her revivification of traditional possum skin cloaks and her contemporary necklace designs using river reeds, kangaroo teeth and echidna quills. Her multimedia installations including photography, sculpture and video further explore the customary ceremonies and rituals of her Ancestors. Clarke’s work has featured centrally in many exhibitions across Australia, and is the focus of a major career survey, Ancestral Memory, at the National Gallery of Victoria, Melbourne in 2021.

Maree Clarke is a Yorta Yorta/Wamba Wamba/Mutti Mutti/Boonwurrung woman who grew up near Mildura along the Murray River in north-west Victoria. An artist, educator and curator, she has played a significant role in researching, reclaiming and reviving dormant south-east Aboriginal cultural practices for over 30 years. Working across sculpture, jewellery, photography and public art, Clarke often uses new technologies, materials and techniques in her artworks, drawing connections between the past and the present. Central to her practice is a belief in the role art can play in continuing culture for future generations.

Clarke’s multidisciplinary practice is grounded in extensive research. Her working methodology often involves photographing significant objects in institutional collections; she then begins a long process of experimenting in her home studio to recreate the objects using current materials and techniques. She notes: ‘my practice is revivifying research. It starts with the research I do and then I turn that research into art, telling stories through art in a contemporary way.’ (1)

Well known for her inclusive and intergenerational working processes, Clarke often brings her ‘family along on the journey’ and for many years has mentored young people from the Victorian Aboriginal Child Care Agency on projects that revive cultural practices. Every aspect of the creation of her artworks, from the sourcing of materials to preparing and finishing the objects, is taught to her younger collaborators. For Clarke, the ‘most important’ aspect of her practice is the ability to pass on her knowledge and skills to the next generation.

At the Museum of Contemporary Art, Clarke exhibits a series of artworks based on south-east Aboriginal body adornments made from kangaroo teeth, echidna quills and river reeds created over the last ten years, alongside photographs of her nephews and collaborators wearing two of the necklaces. Kangaroo tooth body adornments were traditionally presented to individuals of high status within the community. The process of creating a kangaroo tooth necklace is incredibly labour-intensive: removing the sinew and teeth, preparing the leather, mixing the ochre and wattle resin, and finally, binding the teeth with sinew string. Clarke sources the materials for her necklaces from roadkill found on her frequent trips back to Country. The artist only uses the two bottom scissor teeth for her contemporary necklaces although, traditionally, teeth of different sizes would have been used. She photographs every kangaroo she works with, an act which acknowledges and pays respect to the animal.

Around eight years ago, Clarke began making her large-scale river reed necklaces – originally talismans given to visitors passing through Country as a sign of safe passage and friendship. Together with her family, Clarke collects reeds from the Maribyrnong River in Victoria on Boonwurrung Country. They are threaded together with cockatoo, galah or crow feathers that she sources from roadkill. Measuring up to 40 metres in length, these ‘supersized’ artworks reflect on the scale of loss for Indigenous people – loss of knowledge, of language, of life, of land – since colonisation. The physicality of the works also honours and celebrates the oldest continuing culture in the world and the ‘knowledge and skills that are still strong today’.

More recently, Clarke has been working with Canberra Glassworks to create glass river reeds, kangaroo teeth and seed pods, often filled with ochre. She combines the glass pieces with objects including feathers, gold-plated kangaroo teeth, echidna quills and crystals to create striking necklaces that celebrate culture through contemporary technologies and techniques. Clarke’s constantly evolving practice is driven by her dedication to finding new ways to tell the ‘stories of her mob’ for the next generation.

Maree Clarke discusses her work at the MCA

- One time coming back from Albury-Wodonga I'd passed two dead echidnas on the side of the road, which you hardly ever see. And I drove all the way back to Melbourne, got my big waeco esky, drove back 150 kilometres back up the highway, picked up the two dead echidnas, drove back to Melbourne and boiled them up in big pots in my backyard in inner-city Melbourne. Yeah, it was fun.

My name's Maree Clarke. I'm connected to the traditional lands of Mutti Mutti, Yorta Yorta and Boon Wurrung, and Wemba Wemba peoples. I'm a practising artist, have been practising for over 32 years. I started by making jewellery out of timber and seed pods, and gum nuts and things, and then moved into working with more traditional elements like the kangaroo tooth necklace. I do a lot of research in museum collections and learn how the traditional objects were made, and replicate that, and then pass that knowledge on to the next generation.
And it's just the most incredible thing to be working in my backyard, you know, with nieces and nephews who still want to hang out with their Auntie and learn culture. And I remember like working on possum skin cloaks and the kangaroo tooth necklaces.
And my husband's taught the boys and the girls how to pull the sinew out of the tail of the kangaroo, and nobody wanted to go back to cloak making, they just wanted to keep pulling the sinew out of the tail and binding the teeth to make the necklaces. And then I also make river reed necklaces. And I started first off by making a 10 metre river reed necklace for the Koorie Heritage Trust based in Melbourne, and then I started supersizing them to 50 metres.

It's a bit of a wow factor and people take notice, and it talks about the loss of land, language, and cultural practises, on this, you know, huge scale. For this particular exhibition at MCA I wanted to have a whole black collection, but of course, kangaroo teeth are white and they're organic, So I got Canberra Glass Works to fabricate black glass crystal. I just thought it would be a beautiful thing to do. They also, you know, fabricated the, the black, glass river reeds, and the glass seed pods that are now filled with with ochre from country.

And I call those ones: A Moment in Time. And then also as part of this exhibition of photograph, two of my nephews, I wanted to have the boys wearing the necklace this time, because I haven't photographed my nephews wearing any of the jewellery, it's usually my nieces. And those particular necklaces were given to people passing through country, Boon Wurrung country, as a sign of safe passage and friendship.