Kunmanara Mumu Mike Williams made this work explicitly for the National. He passed away only a couple of weeks ago actually, but this work was his largest, most significant, and most politically-powerful work to date.

He was a strong Anangu leader, particularly when it came to native title and to land rights, and was instrumental in actually gaining land rights back with a group of Anangu chairpersons and leaders.

He uses, and has used in the past, works to really communicate a message about Anangu people standing strong in country, and always having that connection to country.

There are postbags that have been stitched into the work, which referenced a history, particularly in pastoral country throughout the middle of Australia and also Northern Queensland and Northern Western Australia, which talks about the way in which post offices were used as ration depots, where people were herded off country and were actually brought into the ration depots to receive flour, sugar, tea, and tobacco.

Unfortunately at these post offices also the flour was ... There was an order made for the flour to be poisoned. When that flour was distributed many, many men, women, and children died as a result. He references that history in this work.

You'll also see on the work that he's used Pitjantjatjara all through the work. You really don't need to understand the words so much as the symbol that it represents, which is essentially him saying we are Anangu, we have always been here, and we never ceded sovereignty.

It is a hugely political work. The title of the work is called The Government Has No Tjukurpa, which is a fairly significant statement about the government having no dreaming or no soul, essentially. 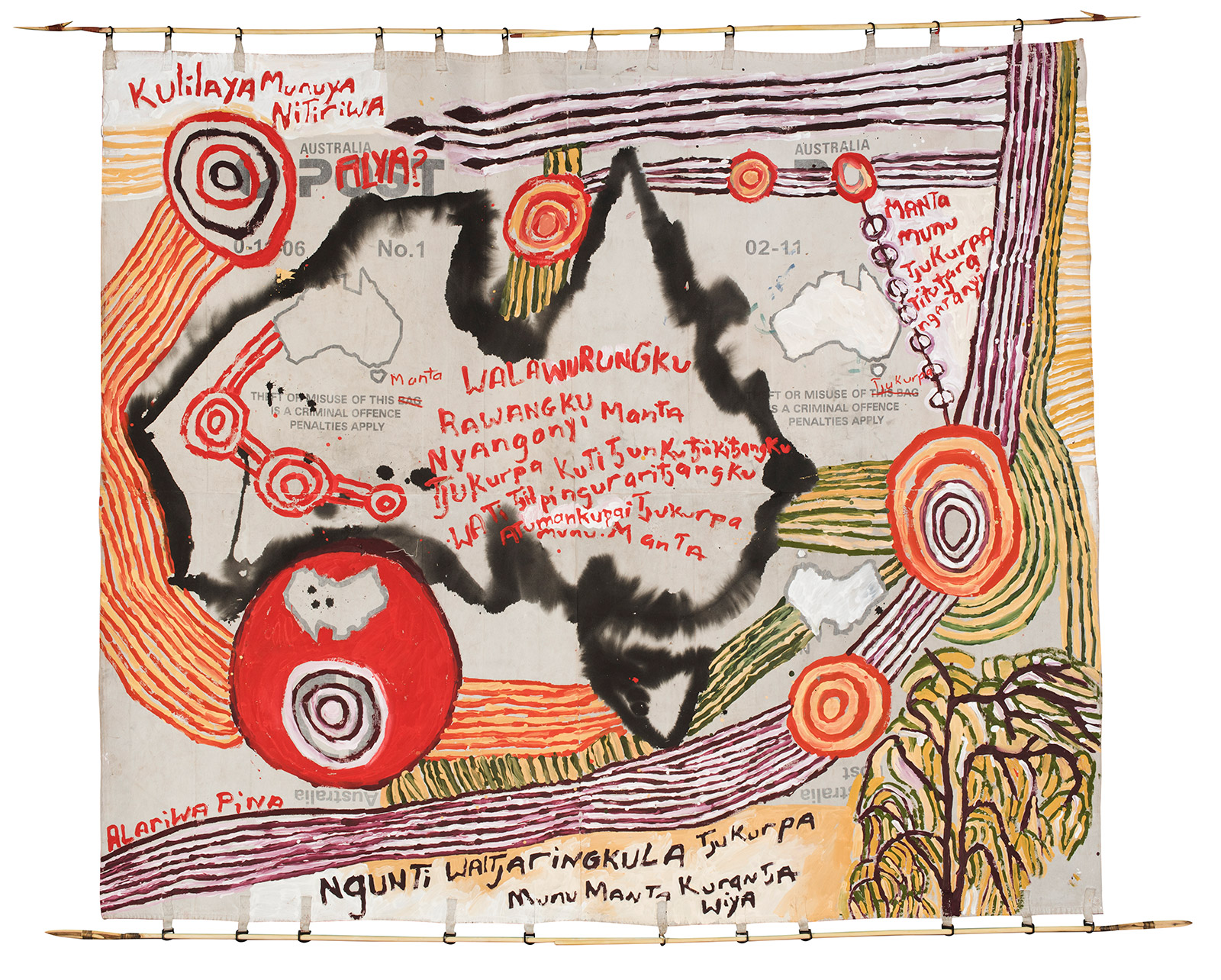 Kunmanara (Mumu Mike) Williams was born in 1952 between Kenmore Park and Pukatja in South Australia. He learnt to read and write in Pitjantjatjara and English at the Ernabella Mission School, before working as a cattle stockman. After returning to the APY Lands, Williams worked as a carpenter building houses in Ernabella. He was active in the APY Land Rights movement that led to the signing of the Pitjantjatjara Land Rights Act 1981 and the return of land to Anangu. Williams was a renowned ngangkari (healer), pastor of the Mimili community church and political activist. He became a celebrated senior artist, addressing issues including governance, sustainable land management, the protection of sacred heritage sites, and the rights of traditional owners.

Black skinned Aboriginal people have always had powerful Tjukurpa Dreaming law and have passed it down through generations since time began. The government simply cannot claim ownership of this land and must never destroy cultural heritage sites. The shame of it. Do not destroy sacred sites or dig up the land around them. Listen, if you come here, you must accept that the law of our land is under the control of our senior men. Do not plan to build roads in the vicinity of sacred sites, because of the risk of destroying Tjukurpa. The government doesn’t have Tjukurpa. This is our land. Our Tjukurpa. Our cultural heritage. Our Tjukurpa is sacred. (1)

Born in 1952 between Kenmore Park and Pukatja (Ernabella), Mumu Mike Williams is a highly cosmopolitan artist. His life has seamlessly melded his obligations as a traditional custodian and working as a stockman, pastor and carpenter. He has traversed his ancestral Country in the Anangu Pitjantjatjara Yankunytjatjara (APY) Lands and has travelled the world, visiting Europe, America, India and the Middle East. For Williams these seemingly disparate worlds are all encompassed within a philosophy of Tjukurpa that is much larger than any imposed human boundaries.

Over the past three years, Williams has embarked on a series of paintings on repurposed canvas mailbags. In using government property as his canvas, Williams draws attention to the conflict between Commonwealth and Anangu law. Williams is a big-picture artist, and his work for The National 2019 is as metaphorically big as they come. Here, ‘Australia’ is rendered larger than the outmoded modernist ideal of a nation-state – it is a radiating haze, an energy field that both envelops and exceeds European cartographic vision. As the lines of Williams’ paintings push to the edge of his makeshift ‘canvases’ they extend out into the world. Unrestricted by the boundaries of states or territories, Tjukurpa connects every point in space and time. Unlike the postal service, Tjukurpa does not need government authorisation; it is eternal, indelible and unbreakable.

The impassioned text writ large in Pitjantjatjara across Williams’ paintings is not a demand for literal translation: it is a demand for recognition. For Walter Benjamin the aim of good translation was not the transferral of information but the acceptance of the kinship of languages – of our shared human urge to signify. (2) Even without understanding Pitjantjatjara, the urgency of Williams’ messages is unmistakable. These are words that demand respect. They demand the recognition of the enduring power of Tjukurpa; of the prior occupation of these lands; of the hundreds of languages spoken on our continent; of the persistence and power of Indigenous cultures; and, perhaps most significantly, they demand the recognition of our shared humanity. These demands are bigger than any government or nation: they are global missives sent out with the precision of a well-aimed spear, more powerful than anything that could be contained within in a mailbag.