The three mud men sculptures, the smaller ceramic works were featured recently in an exhibition that Ramesh had at the National Gallery of Australia. But, for their inclusion here Ramesh has grunged them up. He's added graffiti to the plinths. They've been sighted with this Dirty Deity, the sort of mother of this mutant family. Which was created on site and will be destroyed following the exhibition.

Adjacent to this is a wall drawing, which is a sort of humorous self portrait of the male artist as a sort of heroic creator. I think Ramesh's work really seeks to challenge notions of identity as some fixed, immutable thing. He's influenced heavily by fertility symbols and ideas of sexuality and gender in a number of the world’s religions but specifically in Hinduism. He grew up in Sri Lanka and also Christianity. 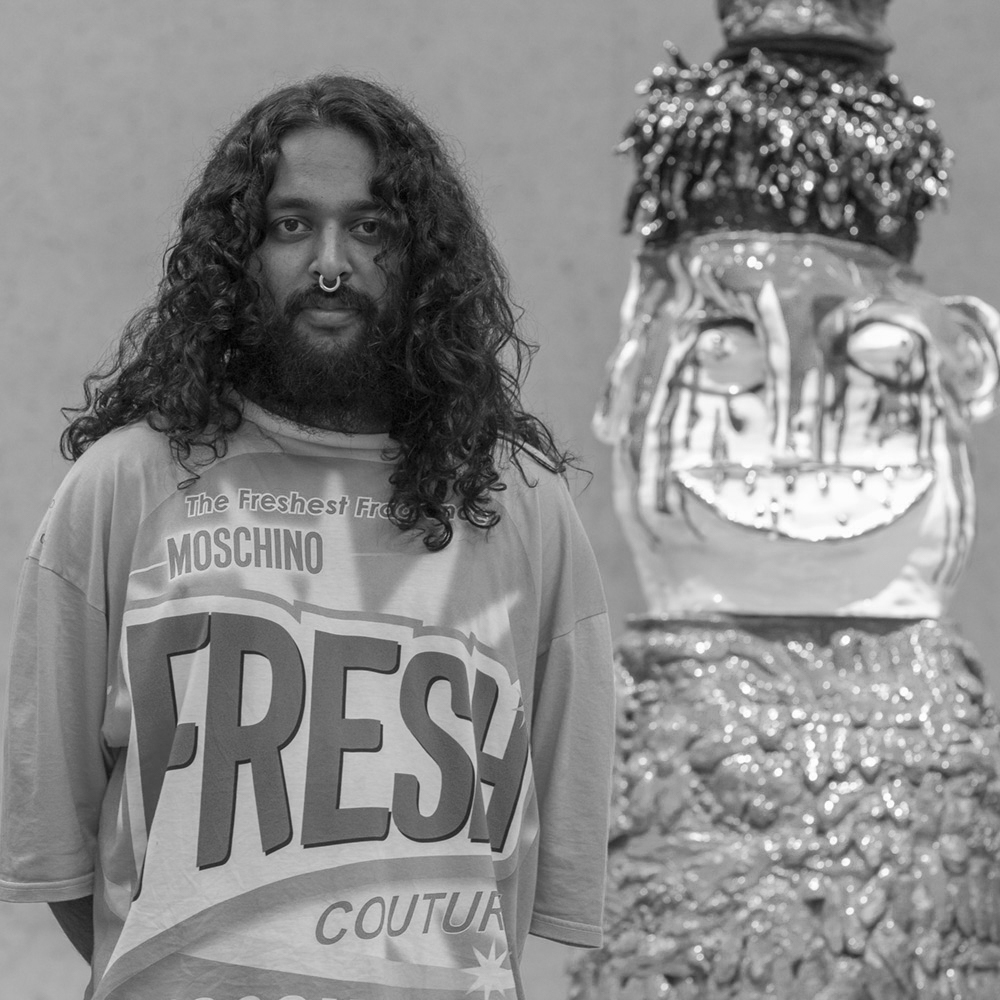 Ramesh Mario Nithiyendran creates rough-edged New Age idols that are at once enticing and disquieting. He experiments with form and scale in the context of figurative sculpture to explore the politics of sex, the monument, gender and organised religion. Formally trained in painting and drawing, his practice has a sculptural emphasis that champions the physicality of art-making. While proceeding from a confident atheist perspective, Nithiyendran draws upon his Hindu and Christian heritage as reference points, as well as a range of sources including the internet, pornography, fashion and art history. Self-portraits make frequent appearances and the dual presence of male and female organs suggest gender-fluid realms of new possibilities.

Caves are naturally occurring, subterranean phenomena. Hidden by nature, they occasionally open up their secrets and become locations of habitation, ceremony or spiritual operations. They also tend to dip once again from view, sealed by some movement of the earth. Ramesh Nithiyendran’s installation The Cave (2016–17) consists of four sculptural figures with wall drawings, contained in a great urban chamber bounded by a structure resembling a reinforced concrete bunker. It is a temporary revelation of a space transformed by human agency – at once serious, witty and incisive – that speaks directly to contemporary experience.

The Cave is dominated physically by the colossal figure of Dirt Deity (2017), which derives its raw power from an accumulation of specially sourced unfired clay, roughly worked polystyrene and neon flex lights. Massive and dense yet curiously spectral, Dirt Deity suggests a kind of spiritual battery, collecting and emitting energy. The large raw wall drawings are its shadows, figures of deference and dissent. Dirt Deity was created in the space and articulates it. More than any other element it is anchored in and belongs to this particular place. Unlike the other sculptural objects that were brought in from elsewhere, this central figure will disappear when The Cave is de-installed.

Big Idol, Elephant Man and Snake Tower (2016) will be more familiar forms to those who have followed Nithiyendran’s practice. Originally shown in Canberra at the National Gallery of Australia, they are, at their core, sculptural ceramics, though characteristically hybridised by the use of other materials and found objects as the artist’s creative requirements demand, without concern for any putative notions of medium appropriateness. A purist’s nightmare, perhaps, but an effective way of making a direct visual statement and of quickly solving technical problems – outstretched arms or oversized heads are infinitely easier to fashion in polystyrene than in clay, for example. This heterogeny of the sculptural body serves also as ironic comment to all those who regard gender, social conventions and religiosity as some fixed, immutable thing.

Earth is a crucially important aspect of Nithiyendran’s practice, whether construed as ceramic or offered up as dried mud in solid or painterly form. It speaks to the importance of place and the very ground to all Aboriginal Australians, and to the disruptions and irreversible transformations wrought on the land by both unthinking and sensitive manipulation. Earth also speaks to the malleability of matter. In turn, it acts as metaphor for our forever-nascent constructions of identity and self. Like the objects and drawings Nithiyendran creates, we are always incomplete, hybrid, yet compelling conduits for meaning and action.

The Cave is concerned with identity, spirituality and belief in the richly diverse city its creator calls home. It channels the language and experience of the streets of that place – diverse, believing, unbelieving, compelling, serious, trivial, committed, cynical, crushed, weighty, naïve, candid, sophisticated, streetwise and detached. As such, it performs an archetypal essence of the city: microcosm related to the macrocosm Sydney. All is underpinned by a kind of religiosity, a feeling for the numinous. It does not prefigure any particular belief of the artist, but rather a sense of the pervasiveness of belief, of the religious or magical sensibility, or the spiritual in things. The Cave encourages us to confront all of this, like time-travelling visitors come to some retrofuturistic temple.