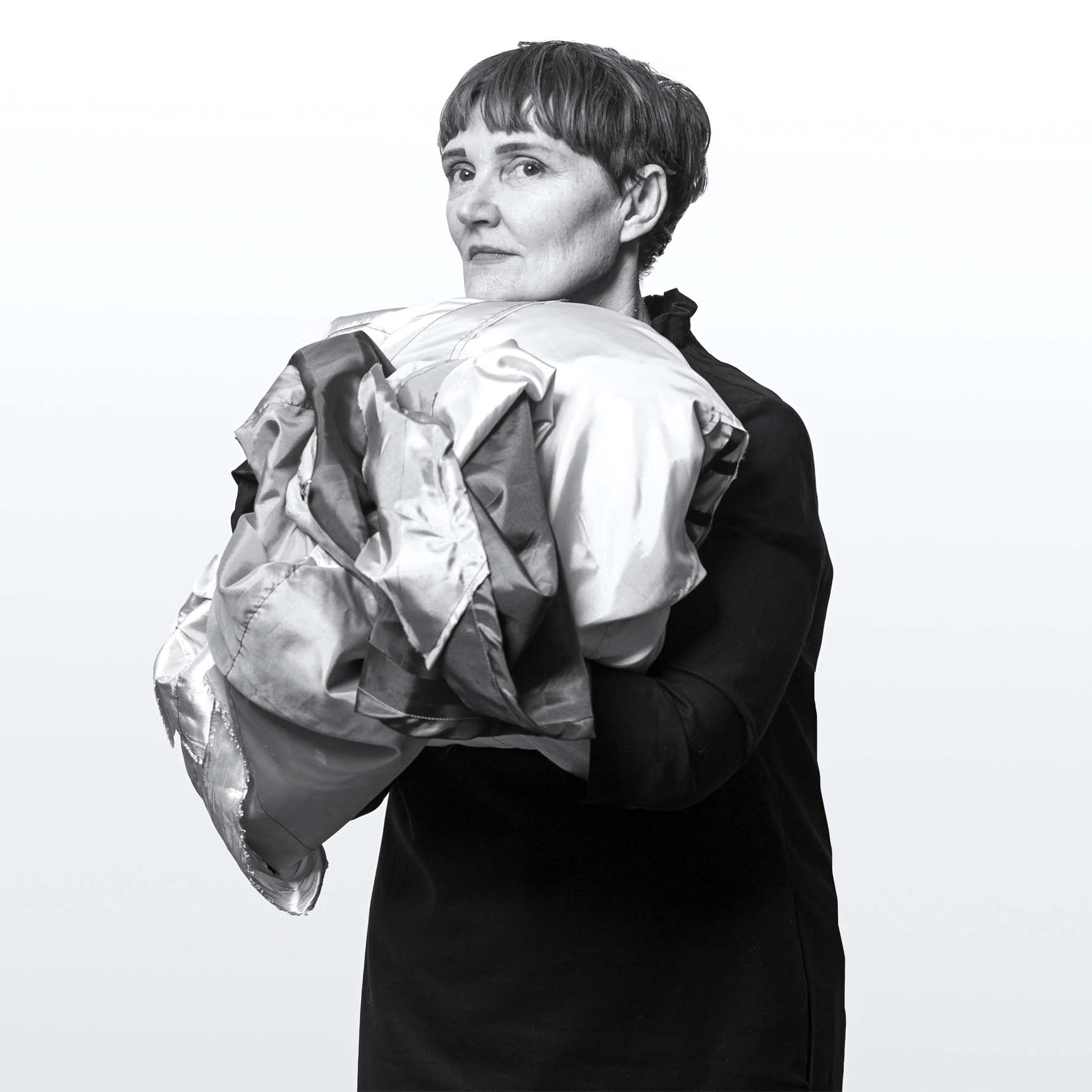 Sally Smart’s practice considers the ways in which identity politics and transnational ideas shape global culture and are expressed in the body. Her interest in female representation is enacted through textile treatments and collage for large-scale installations, as well as video, performance, sculpture and painting. Smart has held multiple solo exhibitions in Australia, Japan and New York over three decades and her works are represented in major collections in Australia and abroad.

Sally Smart works across artistic media, from collage and cut-outs to screenprinting, objects, video and sound. The act of cutting and reassembling is central to her works, which frequently employ fabric elements evoking the human body, the domestic and the feminine. Imbued with a strong psychological dimension, they evoke an uneasy world in which fracturing and fragmentation are contrasted with repair and rearrangement – gestures violent and restorative in turn.

For The National 2021, Smart has created a room-scale installation incorporating suspended fabric panels, video projections and sculptural puppets of varying scale and incompleteness. Entitled The Artist’s Ballet, it reflects her interest in the body, movement and dance. The bold costume and set designs of the early 20th-century dance company, Ballets Russes – realised by modern artists such as Sonia Delaunay and Henri Matisse – are influential for the work. So too is German choreographer Pina Bausch’s Café Müller scenography – in which Smart has replaced Parisian café chairs with painter’s easels.

Large-scale video projections depict two women dancing, their bodies moving through an empty stage, then between an array of easels which they topple, one by one. The fragmented effect of the projections against the fabric backdrop creates a sense of psychological tension, their bodies disappearing then emerging again, in a constant cycle of embodiment and instability. A painter’s colour wheel forms a recurring visual reference – worn as a multi-panelled skirt by one dancer, then cut up and integrated into the patchwork fabric of the backdrop. Gestures and poses repeat over the seven acts of the ballet, the dancers bending their bodies over and containing their movements as though oppressed by their surrounds.

The puppets add an uncanny layer of visuality to Smart’s installation, with their disarticulated bodies and salvaged fabric, cardboard, wire and wooden limbs. Suspended in front of the fabric backdrop, they become unlikely participants in the ballet unfolding behind them: as a pair of feet encased in a dancer’s block shoes; an arm raised, mid-gesture; and hands conjoined. They further suggest a kind of contemporary Constructivism in their unadorned, raw materiality and three-dimensional, geometric parts. Sound is also significant, representing an ongoing collaboration between the artist and her son, Jack Coventry, who draws on early 20th-century avant-garde and contemporary precedents for the composition.

Created against the backdrop of COVID-19, Smart’s work suggests a time of uncertainty, isolation and constraint. It also makes oblique reference to the artist’s great-aunt, the Australian expatriate painter Bessie Davidson, who travelled to Paris between 1904 and 1907 with her companion Margaret Preston to make art. Davidson returned to Paris in 1910, then again in 1914 at the outset of the First World War, remaining there until her death in 1965. Reflecting on her work, Smart observes:

The dance performance embodies timeless themes and psychological tensions for these women, grappling with the avant-garde in art and life, at a traumatic period in human history (war, isolation, gender and modernity). The dance performance creates a contemporary lived presence and connection to the art and lives of women artists.

With its theatrical curtains and dynamic, moving elements, The Artist’s Ballet is a work for our times. Moving between past and present, shadow and light, it presents a haunting tableau in which instability, rupture and repair become the condition through which we move into an uncertain, post-COVID future.

Artist’s acknowledgements
This project The Artist’s Ballet is dedicated to the memory of Maureen Kerridge AM.