Artists, Vernon Ah Kee and dancer, Dalisa Pigram have collaborated on a film called Gudirr Gudirr, filmed in Broome in 2019 and 20. The work is based / draws from a performance work by Dalisa Pigram, who has collaborated, in this film, with a senior Australian artist, Vernon Ah Kee. In this context, Vernon is directing a film for the first time using his, now familiar, text-based imagery, laid onto the dance work. It's a very powerful and passionate movie shot in Broome in the far North West coast of WA, where Dalisa Pigram lives. And the language throughout the film is both Yawuru, English and also local Broome Aboriginal English, the creole of the region.

Gudirr Gudirr is a invitation to listen. For thousands of years, the call of the Guwayi bird has signalled a change in the tide for Aboriginal people of far North West Australia. Ensuring safety from the dangers of the ocean, but used here as a metaphor for... as an invitation to listen and a warning for changes that need to be made. It's a cry for the devastating impact of colonisation on the region and also Aboriginal people of this country – of forced separations intergenerational trauma and massacres. So it's an alarm to warn of dangers that have taken place in the past, but those still present. 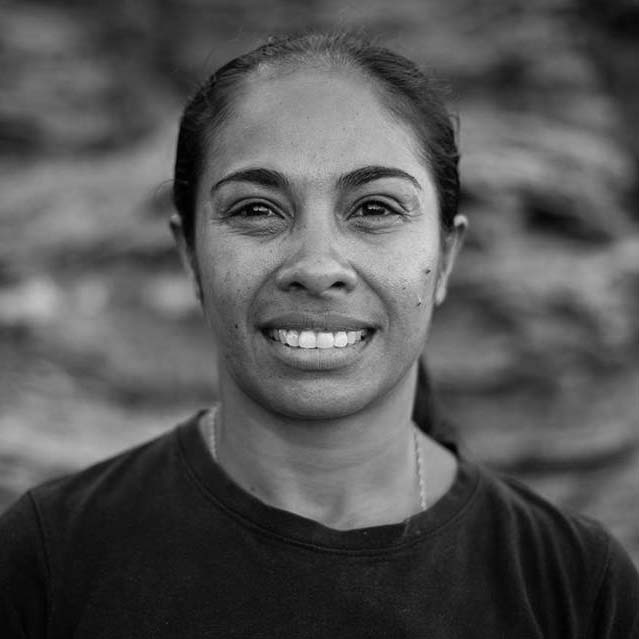 Choreographer and dancer Dalisa Pigram is a Yawuru/Bardi woman born and raised in Broome. Pigram is co-artistic director of the dance company Marrugeku. Pigram’s groundbreaking solo work Gudirr Gudirr, co-choreographed with Koen Augustijnen, premiered in 2013 and has been performed on stages around the world, earning an Australian Dance Award (Outstanding Achievement in Independent Dance 2014) and a Green Room Award (Best Female Performer 2014). Through her work with Marrugeku and as a Yawuru language teacher in her hometown, Pigram is committed to the maintenance of Aboriginal languages and culture through arts and education.

Marrugeku is an unparalleled presence in Australia today, developing new dance languages that are restless, transformative and unwavering. Marrugeku builds bridges and breaks down walls between urban and remote dance communities, between Indigenous and non-Indigenous artists and between local and global situations. Marrugeku is led by co-artistic directors, choreographer/dancer Dalisa Pigram and director/dramaturg Rachael Swain, with General Manager Robina Burton. Marrugeku’s patron is Yawuru cultural leader and national reconciliation advocate, Patrick Dodson. The company is based in both Broome and Carriageworks, Redfern. 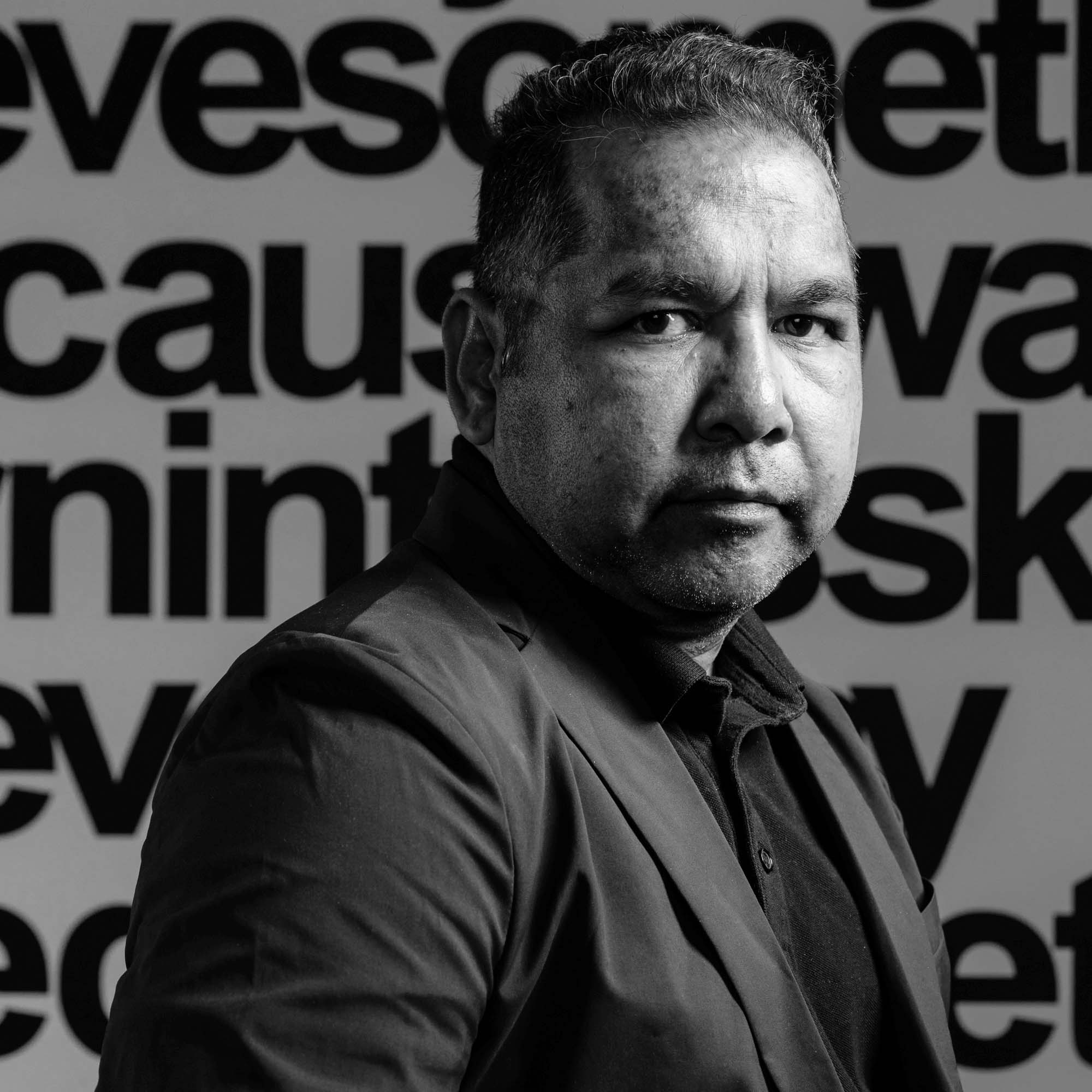 Vernon Ah Kee’s conceptual text pieces, videos, photographs and drawings critique Australian popular culture from the perspective of Aboriginal experience in contemporary life. In particular, he explores the dichotomy between Aboriginal and non-Aboriginal societies and cultures. Ah Kee’s works respond to the history of the romantic and exoticised portraiture of ‘primitives’. He effectively repositions the Aboriginal in Australia from an ‘othered thing’, as represented in museum and scientific records, to contemporary people inhabiting real and current space and time.

Look out!
Listen to me
Listen to this warning bird
This little bird ‘guwayi’
Big cyclone going to come for us
No country, no water, no people
Big wind
Big tides
Lots of rain
You better watch out! (1)

This immersive 3-channel video and sound installation was developed from Dalisa Pigram’s solo performance of the same name. It was first realised in 2013 with Marrugeku – the intercultural dance company based between Sydney and Broome – where Pigram is choreographer and co-artistic director alongside director and dramaturg Rachael Swain. Richly layered and deeply personal, Pigram’s dynamic movement and spoken word in Yawuru, English and the local vernacular of Broome Aboriginal/English represents an embodiment of the past, encounter with the present and redetermining of the future. Gudirr Gudirr is directed by Queensland-based visual artist Vernon Ah Kee who brings his particular aesthetic of text-based imagery, portraiture and hand-held footage, natural extensions of the stripped-back set design and video installation he created for the original stage production. This iteration of the work was shot on location in Broome during 2019.

For thousands of years the call of the guwayi signalling the change in tide kept the Aboriginal people of the region safe from the dangers of the ocean. In Gudirr Gudirr the call urges us to listen to the rhythms embedded in nature, and to the knowledge passed on by Elders. The call is a cry for the devastating impact of colonisation on the Aboriginal people of this Country – of massacres, forced separation and intergenerational trauma – and an alarm to warn of the dangers still present. Pigram embodies the anger and exhaustion of a community where the rates of suicide among Aboriginal people are seven times higher than the national average. (2) The complex history of the Kimberley and the exchange between Aboriginal people and Asian migrants who settled in the region is also a crucial element of this work. The stories of Aboriginal and Asian relationships in northern Australia have rarely been told as European colonisers controlled the legal status and rights of these people and systematically organised the separation of families, deportation of Asian men in relationships with Aboriginal women and denied a generation of children their cultural heritage. (3)

Through Gudirr Gudirr, Pigram responds to this call. Her choreographic language is a hybrid drawn from her ancestry; traditional Aboriginal movement (her family come from the Yawuru people of Broome and Bardi people of the Dampier Peninsula) is combined with the martial art silat (from her Malay heritage), as well as gymnastics, the observation of animal movements, and contemporary culture such as breakdance. Pigram enables this array of rich and complex movement to take new form through her body. There is a similar sense of unbroken tradition and resilience in Pigram’s use of Yawuru; at home in Broome, another of her roles is as a language teacher, having worked alongside and studied Yawuru from one of the few remaining Elders who speak the language fluently.

Ah Kee is best known for his searing text works that expose the systemic racism in Australian culture as well as remarkable large-scale charcoal portraits of his family. His direction tempers Pigram’s words and movement with text on screen and frequent freezes of the frame on her face or body in states of contortion. The incorporation of hand-held footage of young Aboriginal men street fighting in Broome and a lizard desperately trying to free its head from a discarded beer can provides a stark contrast to Pigram’s absolute physical control on screen. Gudirr Gudirr is the result of a long collaboration between two of the most important artistic voices working in Australia today with a message that must be heard.

(1) Dalisa Pigram, translation from Yawuru to English of the opening monologue from Gudirr Gudirr, 2013.
(2) Nathan Hondros, ‘If the Kimberley was a country, it would have the worst suicide rate in the world’, WA Today, 3 Aug 2018, at com.au/national/western-australia/if-the-kimberley-was-a-country-it-would-have-the-worst-suicide-rate-in-the-world-20180802-p4zv3s.html, accessed 1 Feb 2021.
(3) See Regina Ganter, Mixed Relations: Asian-Aboriginal Contact in North Australia, University of Western Australia Press, Perth, 2006.

Based on an original concept by Dalisa Pigram with Patrick Dodson, realised by Marrugeku

Commissioned by Carriageworks and Marrugeku for The National 2021: New Australian Art.